Five years ago, on a trip to Israel, my rented car was vandalized. Reporting the incident at a Jerusalem police station, I noticed that signs were posted in Hebrew and English, but not in Arabic. I thought that odd. Returning to Israel this past April, camera in hand, I went in search of local signage. 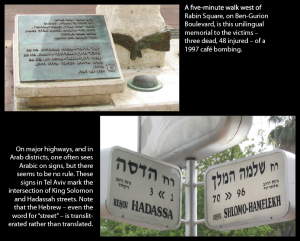 I spent a week in Tel Aviv, and a few days driving through the Galilee (northern Israel). Here, with my annotations, are photographs of what I found. These are accompanied by information about language in Israel, which, except where otherwise noted, is made up of excerpts (lightly edited for brevity) from “Language in Israeli Society and Education,” a 1997 paper by Bernard Spolsky and Elana Shohamy (which may be found at www.tau.ac.il/education/homepg/shohamy.html).

Spolsky and Shohamy are professors at Bar-Ilan and Tel Aviv universities, respectively, and coauthors of The Languages of Israel: Policy, Ideology and Practice (Clevedon, UK: Multilingual Matters, 1999). I am grateful for permission to quote at length from their paper. 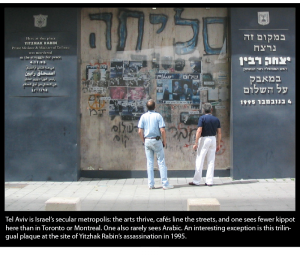 The language of government was Turkish. Peasants and town-dwellers spoke local dialects of Arabic. Classical Arabic was the written language of the educated elite. Sephardic Jews spoke Arabic, too, but inside the community, their language was Judezmo, a Jewish language based on Spanish, with a written form called Ladino. European languages were being introduced and encouraged by missionary Churches and powerful foreign consuls … Most of the masses of Ashkenazic Jews who started to arrive from Eastern Europe in the second half of the century spoke Yiddish but brought with them co-territorial vernaculars like Russian, Polish and Hungarian.

Hebrew became the principal language of the zealous Zionist socialists who founded the communal settlements and was established as the only sanctioned public language in the new Hebrew city of Tel Aviv. By 1913, its supporters were able to take up and succeed in a bitter argument over the language to be used in the Technion, a planned technological tertiary institute, and to make sure that the planned university be unambiguously labelled “the Hebrew University of Jerusalem.”

The monolingual ideology was bolstered by a number of myths and assumptions:

The achievement of this ideology has been high, in producing the unique case of a language no longer spoken being fully revitalized, and an uncommon case of a language being modernized to handle most functions needed. The cost too has been high. A once multilingual population is on the way to becoming monolingual or at the best bilingual. The national capacity in language has been frittered away. The rich cultural heritage of the two thousand years of Jewish culture and life in the Diaspora has been undermined. 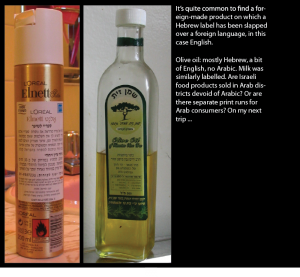 Many of the Jews arriving the 1920s from Eastern Europe went first to kibbutzim, where the strength of communal pressure encouraged them to move from their use of Yiddish and Russian or Polish to private as well as public use of Hebrew. Their children, “children of the kibbutz,” grew up as monolingual native speakers of Hebrew, with a moderate passive knowledge of their parents’ languages and no respect for their importance. The second generation sometimes learned some Arabic (for ideological or pragmatic reasons), but the third was made up of monolingual Hebrew speakers … By 1948 when the state of Israel was established, Hebrew was the principal language of the bulk of the Jewish population.

There did however remain some resistance to the acceptance of Hebrew … This is most obviously demonstrated by the ultra-Orthodox Jews in Israel, most of whom maintain Yiddish as language of instruction in their segregated schools and the language of speech in their closed communities.

The Arabs of Israel also constitute a group demonstrating strong language maintenance. They are culturally and linguistically heterogeneous. There are differences between the Christian Arabs, mainly living in towns and with long contact with linguistically diverse churches, and the Muslims, many of them villagers or recent city-dwellers. Bedouin and Druze also make up distinct groups. All Arabic speakers share in the same diglossia that marks the Middle East, with a single Classical variety accepted for literacy and formal use, a large number of local vernaculars as spoken language, and a tendency to develop an educated standard version.

When the State of Israel was established 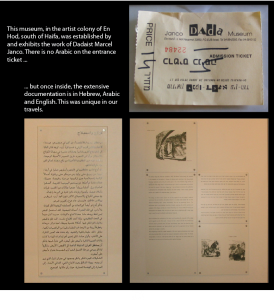 in 1948, all British Mandatory law and regulations remained in effect until amended. One specific law that was amended was that concerning official languages. English was dropped, leaving Hebrew and Arabic as the two official languages of the new state, but the meaning of this is far from clear. The three languages appear on coins and stamps. Laws are translated into Arabic and English. Lawyers may under special conditions plead in English as well as Arabic.

As Israel does not have a written constitution, and as there is no law defining language policy, the policy issue is somewhat unclear … As recent studies show, language policy appears to be set at a local level, each government office deciding what is appropriate. in 1989, the Post Office added Arabic to its signs; in the same year, the Police dropped it from theirs, leaving them bilingual.

It is important to note that Israel is one of the few non-Muslim countries where Arabic is officially recognized. There is an Arabic-language government radio station and the government television station broadcasts in Arabic two or three hours a day. Arabic is also the language of instruction in Arab and Druze schools, and it is taught in Jewish schools. However, de facto, it is regularly discriminated against (Bernard Spolsky, “The Situation of Arabic in Israel,” in Yasir Suleiman, ed., Arabic Sociolinguistics; Issues and Perspectives ).

Most Israeli Arabs are now bilingual in Arabic and Hebrew … In cities like Jaffa and Haifa, where there is close contact with Hebrew speakers, there is an increasing development of high levels of proficiency in Hebrew, even at the cost of Arabic maintenance. A number of Arab children in Jaffa now attend Jewish schools and kindergartens. While the Druze use Arabic as their first language, because they serve in the Israeli Army they are often fluent speakers of Hebrew. 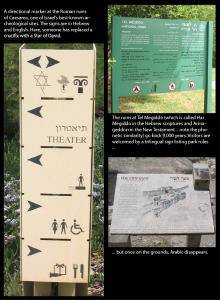 Because of the accepted minority status of Israeli Arabs, their language poses no threat to the hegemony of Hebrew in the society as a whole. Arabic in Israel is markedly a second official language, and not the competing partner in a dyadic, bilingual state. Its role is like Swedish in Finland or French in Canada, rather than say French in Quebec or in Belgium.

For Israelis, Arabic is the language of the surrounding Arab states, states which have been engaged in war with Israel since its establishment and that continue to be seen as potential threats to national identity. It is, second, the language of the Palestinians living in Gaza and the West Bank, the heirs and continuing assumed supporters of a national liberation movement that has and still uses terrorism to achieve its goals. It is third, the language of a minority group within Israel, granted full civil rights since the creation of the State, but still feared as a potential fifth column in struggles either with the Palestinians or with other Arab states.

There is a perceived and perhaps real threat to the hegemony of Hebrew in the spread of English … As well as serving as a language for access to business, science, education and travel, English is the language of major Jewish diasporas in the United States and elsewhere. Most important, there was a significant impact from the large number of English-speaking immigrants who arrived in the years after 1968 … The need for English has continued to increase. Parental pressure had forced the schools to start teaching English earlier.

Besides English, there have been three major groups of immigrants over the last few years that are starting to have new influences on Israeli multilingualism. The largest is the recent immigrants from the former Soviet Union … Four daily newspapers are now published in Israel in Russian … This group may well have better success at slowing language shift than others. The second is a group of about 75,000 immigrants from Ethiopia, mainly speakers of Amharic and Tigrinya, with some literacy in Amharic and Giiz. The major cultural gap has meant that integration is slow, and only younger people are making progress in acquiring Hebrew. The third group, whose presence has only recently started to be commented on, are between 100,000 and 300,000 foreign workers, including sizable numbers from Romania, Thailand and Africa. Some were brought in to replace Arabs from the West Bank and Gaza; many others are here illegally.

The Israeli Ministry of Education supervises 2,500 vocational, agricultural and comprehensive schools. These are organized into schools with Hebrew as the language of instruction (2,000) and those with Arabic (500). Those teaching in Hebrew are for Jews; the Arabic schools are for non-Jews. There are also 60 or so schools outside the system supported partially by state funds … A consolidated document has been published setting out language education policy. It starts by reaffirming the prime importance of Hebrew and Arabic as mother tongues and as languages of instruction for the two communities. There is recognition of the need for each community to learn the other’s language, and an additional year (10th grade) is added to the teaching of Arabic required in Jewish schools. 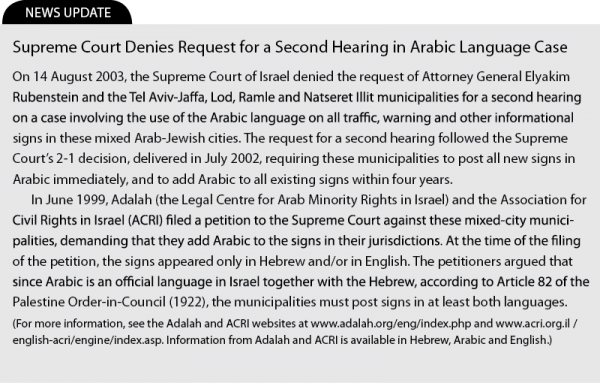