An introduction by Henry Milner and John Richards

It was not only the weaknesses of our economic institutions, but also of our political institutions, that were signalled by events in the fall of 2008. The first manifestation came in September when Prime Minister Harper, claiming that Parliament was dysfunctional, asked Governor General Michaëlle Jean to dissolve Parliament and thus free him of the obligation to comply with his own fixed election date law. No one complained too much when she went along, since Parliament truly was dysfunctional.

The sad story of how we came to this is recounted by longtime Parliament-watcher Gary Levy. In analyzing our failure to adapt our institutions to the recent spate of minority parliaments, he concludes that when successive leaders play fast and loose with basic conventions of parliamentary government, it is only a matter of time until there’s a political explosion. Click here to read “Confidence Game”

Next came the October election, the results of which hardly justified the premature dissolution. A record low turnout returned another Harper minority in an election whose only memorable development was the repudiation of Stéphane Dion’s Liberals.

No sooner had we settled down for a few more years of a Harper minority than the Governor General again found herself forced to enter the muddy parliamentary waters. By accepting Harper’s request to prorogue Parliament in early December, she saved the new government from defeat at the hands of a Liberal-NDP coalition supported by the Bloc Québécois. Bruce Hicks looks at the thin set of historical precedents for this kind of vice-regal intervention. Click here to read “Lies my Fathers of Confederation Told Me” 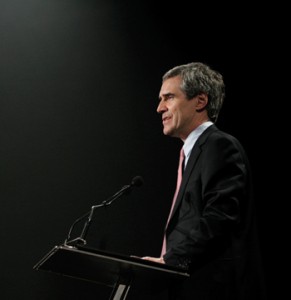 The fallout from her decision included an unprecedented action, at least for the modern era, by the Liberal caucus. Instead of becoming prime minister in a Lib-Lab coalition or leaving the political stage by resignation, Stéphane Dion was forced out by his own caucus, which then anointed Michael Ignatieff.

The core of Dion’s electoral strategy had been the attempt to persuade Canadians to accept a carbon tax (the “Green Shift”). The strategy failed. In the aftermath, it is understandable that the Liberals eschew policy and simply bask in better poll results (at time of writing they have drawn slightly ahead of the Conservatives). But should they return to power, they cannot rely on their leader’s family biographies as guide to policy. At their May convention in Vancouver, Ignatieff proposed a sensible reform to Employment Insurance: relax eligibility during the recession and eliminate the present regionally variable aspects of eligibility. He also vaguely suggested giving priority to early childhood and Aboriginal education. Beyond that, not much.

We asked four people with an active interest in Liberal policy – Peter Dinsdale, Tom Kent, Janice MacKinnon and Nancy Olewiler – to give advice.

Tom Kent raises the question of electoral reform in a wide-ranging article about what the Liberals need to do to restore the confidence that Canadians had in their government over the 30 years after World War II. Rejuvenation will not come Obama-style but through a reforming party, providing leadership through policies that can again embody the national feeling of Canadians. In his usual forthright manner, Tom Kent sets out some guidelines as to what those policies should look like.

Peter Dinsdale places Aboriginal policy at the centre of his concerns. He starts with the undeniable fact that the majority of Canadian Aboriginals are now urban; hence, Aboriginal policy anchored primarily on reserve-based issues of treaties and land claims is hopelessly inadequate. He diplomatically expresses disappointment at the failure, to date, of Ignatieff to grapple with the complexities of urban Aboriginal reality.  Click here to read “Urban Aboriginals”

Ignatieff has distanced himself from the coalition. As he should, argues Janice MacKinnon. She urges Ignatieff to continue initiatives to restore Liberal credibility west of Toronto. The major flaw in the coalition strategy was not Harper’s claim that it lacked parliamentary legitimacy: the coalition commanded the majority of MPs and by parliamentary convention could have formed a legitimate government. The flaw was an existential threat to the federation’s unity. A coalition-led government had the potential to exacerbate regional divisions to the point of crisis. Whatever their political leanings, whatever their dismay over the November 2008 fiscal update (the catalyst triggering the coalition), western Canadians were overwhelmingly hostile to yet another Quebec-led government being the outcome of the October election. Click here to read “Ignatieff’s Main Challenge is in the West”

Nancy Olewiler makes the case for the Liberals’ maintaining their commitment to environmental innovation and not succumbing to naysayers’ cynicism following the party’s October rout. The subsequent election of Obama as U.S. President changed the environmental game. Unlike Ottawa, Washington wants to do what is necessary: price carbon emissions. The United States has taken the lead and Canada must – for reasons both pragmatic and noble – follow. Click here to read “Green the Liberals: Yes You Can”