In Empire Lite, Ignatieff points out the rather obvious, at least to Canadian observers: that the United States has an empire. But he goes on to analyze what this means, noting that without actual colonies and possessions, the American version is vastly different from the grand imperial projects of the Romans and the old European nations. Nor does he necessarily mean that the Americans have an economic empire. Rather, 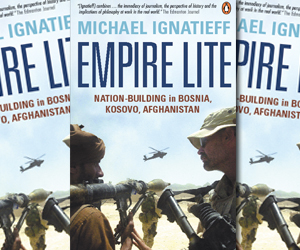 It is empire lite, hegemony without the burden of direct administration and the risks of daily policing. It is an imperialism led by a people who remember that their country secured its independence from an empire, and who have often thought of their country as the friend of anti-imperial struggles everywhere. It is an empire, in other words, without consciousness of itself as such. But that does not make it any less of an empire, that is, an attempt to permanently order the world of states and markets according to its national interests.

Ignatieff also dismisses the notion that this is an empire that has been built on lofty ideals of humanitarianism, arguing that the United States, whose power is the dominant force behind any activity undertaken by the United Nations or other governments or agencies, has constructed this empire lite for imperial reasons: to consolidate, assert and maintain its world hegemony and leadership and ensure its own security. He also notes that in taking on the terrorists, the United States, “the most carefree empire in history,” has now engaged itself in a military campaign with no discernible end. And Ignatieff cautions that “an endless war on terror tempts the empire to overstretch, and when it overstretches, it becomes vulnerable.”

The American empire, indeed, appears to be in danger of falling. According to Ignatieff, successive American administrations in the post–Cold War world have attempted to rule the empire on the cheap, without putting in much of an investment or anything resembling an imperial infrastructure (arguably, this is because the Americans do not see themselves as having an empire). This is where Ignatieff is critical of the American brand of empire lite. He argues that this policy of empire-building is shortsighted and not conducive to the long-term interest of either the governors or the governed.

Ignatieff finds fault with the (post)modern attention span of the imperial powers, most notably the United States (the primary and key power in these enterprises), for their imperial and nation-building projects. He criticizes what seems to be the inherent contradiction of American (and European) imperialism in the postmodern age: the West claims to believe in self-determination, but consolidates power in its own hands; it respects local cultures, but is just as contemptuous in practice of these cultures as the old imperialists. Most importantly, Ignatieff criticizes the Americans and Europeans for claiming to be in it for the long haul while always being mindful of the exit. The attention span of the Americans and their allies is not only finite; it is most often infinitesimal.

Empire Lite presents three case studies from the past decade, Bosnia, Kosovo and Afghanistan, as examples of this new (post)modern imperial enterprise. Ignatieff notes that while the world community appears to be enthusiastic about the reconstruction of these three torn states, in comparison to the practices of the British Empire in the 19th and early 20th centuries,

The timetable for in Kosovo and Bosnia is considerably shorter . They must make the transition from war to peace, from Communist political culture to Western democracy, in less than a decade. Afghanistan will be force-marched toward democratic elections within three years. No imperialists have even been so impatient for quick results.

To this list can now be added Iraq, where the Americans turned over governance to an appointed Iraqi government just over a year after the fall of Saddam Hussein. The fundamental cause for this impatience, Ignatieff asserts, is “the democratic character of the Western powers. Most empires of the past were not democracies at home, and they did not aspire to make their colonies democratic abroad.” These timetables that he decries for being too short are connected to the election cycles of the Western powers, most notably the United States: “No modern incumbent wants to be saddled with an imperial failure in an election year, especially when faced with a challenger who is calling for the troops to come home.” Indeed, this has been exactly George W. Bush’s problem.

Ignatieff, however, is suffering from a form of historical amnesia on this front. The United States is not the first democracy to own a sizable empire. Indeed, Britain, the imperial seat of the largest and most formidable empire the world has ever seen, was not just a democracy, but also prided itself on being so. General elections in Britain were often fought over notions of empire and Britain’s “duty” in the world, most notably during the 1870s when William Gladstone, a “little Englander,” was leader of the Liberals and Benjamin Disraeli, an imperialist, was the leader of the Tories.

Thus, it is not necessarily the democratic nature of Western governments that causes the shortsightedness of today’s imperialism. The other two factors Ignatieff acknowledges are the shutter-speed attention span of the modern media and the “competing interests of the condominium of powers who pay for these imperial exercises.” The latter factor has some merit, and comes out clearly in Ignatieff’s discussion of the manoeuvring among the UN, NATO, the European Union and their various constituency members over Bosnia.

However, in his arguments concerning the media, Ignatieff suffers from the same historical amnesia as in his assertion about democracy. The London media during those Disraeli/Gladstone elections or, later, after the disastrous Boer War shrieked about the plight of England, Empire and English manliness in a way that would do CNN or FoxNews proud. True, they didn’t have the immediacy of coverage that today’s media do, but they were just as shrill and speculative – and sloppy.

In Empire Lite, Ignatieff appears to be a man divided. He has long championed the cause of human rights and humanitarian interventions. And ultimately, whatever the origins of American motivation, he wants to see this new (post)modern imperialism as a humanitarian enterprise. The problem, however, is that this does not appear to be the case. The West by and large stood by as genocide occurred in both the former Yugoslavia in 1992–93 and Rwanda in 1994. It has also done next to nothing to aid in the rebuilding of Rwanda.

Certainly, something is being done in to rebuild war-torn Bosnia, Kosovo and Afghanistan. However, such humanitarian interventions occur only in those parts of the world where the West, and the United States in particular, has an interest, as Ignatieff himself partially acknowledges in his introduction. What he does not acknowledge is that these interventions do not occur until after the damage has been done, as was the case with Bosnia. Moreover, as we have seen of late with respect to Iraq, it was only after the weapons of mass destruction Messrs. Bush, Cheney, Powell and Blair assured us were in Iraq were not found that these leaders began to espouse the great humanitarian benefits of the demise of Saddam Hussein (not that his downfall is not a positive development for the Iraqi people).

Ultimately, then, Ignatieff leaves us without a cogent explanation for the short attention span of the (post)modern imperial project. This is a problem, because from this vantage point anyway (and Ignatieff would agree), the short attention span of the West is most certainly key to the reason why “empire lite” may ultimately fail in Bosnia, Kosovo, Afghanistan and Iraq.

There is also the problem of Ignatieff’s tendency toward hyperbole; at times he comes off sounding more like a Bush administration spokesperson than a well respected public intellectual. Thus, “Terrorists everywhere have been cured of the illusion, created by the American retreat from Somalia in 1993, that the empire lacks the stomach for a fight,” or “ status as the sole remaining imperial power makes it easy to forget how much of its international prestige in the twentieth century derived from taking the side of freedom against empire.” First, the jury is still out as to whether or not the Americans are willing to undertake a long fight to uphold their principles: Afghanistan was turned over to a multilateral force at almost the first opportunity, and while Iraq has seen a relatively large number of American casualties, this also prompted Bush to speed up the handing of power over to the Iraqis.

Indeed, this is a fundamental flaw and contradiction in Empire Lite: on the one hand, Ignatieff claims that we have seen, since September 11, 2001, that the United States has the stomach for a fight, while on the other hand he complains that the United States, primary among world powers, has an attention span too short to see through a proper nation-building enterprise. And with respect to America’s alleged prestige, Ignatieff seems to suffer from another case of historical amnesia insofar as Central and South America are concerned. While he does acknowledge that American respect for national self-determination in Latin America was “less obvious,” he is more than slightly dismissive of Latin America and does not address the fact that, since the promulgation of the Monroe Doctrine in 1823, the United States has considered it its birthright to interfere with the internal politics and sovereignty of the countries of Central and South America. Certainly American involvement in Latin America had less to do with national self-determination and “freedom” than it did with upholding American interests, irrespective of the brutality of the régime.

In the end, the title of Ignatieff’s pamphlet is all too fitting, and this is too bad, for Ignatieff is a formidable intellect and can certainly do better.