The best source for informed lively commentary since 1992

Fake news? Post-truth? Politically correct? Internet trolls? Alt-right?
In today’s shrill, hyper-partisan media environment, informed, evidence-based analysis, untainted by an ideological agenda, is needed more than ever.
Inroads has been providing such analysis, in a lively, accessible way, since 1992.

Scanning the Globe
Europe, Asia, Africa, the Americas and Australia through a Canadian lens 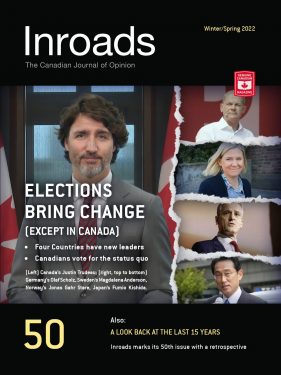 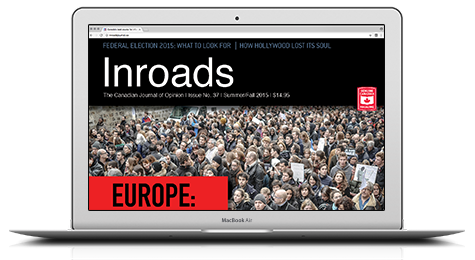 Inroads is an energetic and eclectic read. It covers Canadian policy issues in depth and in a surprisingly nonpartisan way. There's a wide range of thought in these pages.

Inroads is a valuable little magazine. Directed in the first instance at readers on the Left, it makes a heroic effort to include other points of view and promote dialogue across the political spectrum.

If our social policies are to develop on a firm foundation, we need to be able to think outside the box of partisan and short-term considerations. That's where Inroads comes in.

Inroads is an important review because it communicates to English-speaking Canadians the important ideas debated in Quebec in French. I want Quebec's intellectual life better understood in English Canada; and it is my hope that Inroads will be widely read.

I read Inroads to understand how and where Quebeckers might best build bridges to English Canada.

Frances Boylston has led a very international life. After obtaining her degree in sociology at a South Carolina college, she became one of the first Peace Corps volunteers and was posted to the Philippines... Read More