I wish to take issue with several of the points made by Major John R. Grodzinski (“Remembering the War of 1812,” Inroads, Summer/Fall 2012, pp. 112–24) and, more generally, the standard interpretation put forward by historians of the war of 1812.

Major Grodzinski cites a soldier of the time who called it a “hot war and unnatural war between kindred people.” However, it is inaccurate to describe it as a war between kindred people, a civil war if you will. It was a most uncivil war, in which frustrated U.S. troops and militia turned the farms and mills of western Upper Canada into charred ruins. It featured a small Loyalist community driven north from their homes having to fight all over again for their right to remain British.

In my view, the war is best understood as a conflict for strategic commodities, in particular hemp and iron from the Baltic and timber from Nova Scotia and Canada.

As the year 1812 began the Emperor Napoleon, nearing the end of his military career, was being seriously threatened by attacks on his army in Spain, now the property of his brother Joseph, King José I. His plans for the invasion of Britain had collapsed with the defeat of the French and Spanish fleets at Trafalgar. Funds from the American purchase of Louisiana had kept his treasury afloat, but his armies were relying more and more on ravaging the countries they controlled.

Napoleon’s only hope of victory was to cut off commodities to the Royal Navy, particularly hemp from Russia, which supplied 90 per cent of the navy’s needs. Without a supply of hemp for sails and rope and oakum, Britain’s navy would collapse in less than 18 months. At Tilsit, he had signed a treaty with Tsar Alexander to stop the British hemp trade, but the Russian nobility, whose serfs produced the bulk of the commodity, refused to go along with support for France. Furthermore, the Royal Navy completely controlled the Baltic and had coopted scores of “neutral” New England ships into the hemp trade to evade the letter of the treaty. In this context, Napoleon’s invasion of Russia constituted a last desperate attempt to stop the hemp trade with Britain.

Where did the United States come in? First, Napoleon had withdrawn 20,000 troops from Spain, and desperately needed a western front. We know that in meetings in early 1812, he and his officials promised U.S. Ambassador Joel Barlow that if the Americans tied up the British in North America and made an effort to stop timber exports to the Royal Navy, or even captured all or parts of Canada, he would consider accepting the Americans’ $5 million offer for East Florida and discussing the sale of northern Mexico. Both territories were Spanish and therefore Bonaparte family properties. U.S. President James Madison’s administration jumped the gun, and sent a filibustering expedition to Florida before the War of 1812 began.

Clearly, the two invasions – of Russia and Canada – were timed to go off together, in June of 1812.

Most historians continue to zero in on U.S. anger at impressment of sailors and British trade restrictions as the main causes of the war. I would argue that this interpretation is flawed, and that much of the Madison administration’s anger was manufactured for political purposes. It was directed at keeping the support of southern ship captains and against the New Englanders, who were profiting greatly from the Napoleonic Wars – especially Yankee captains flying flags of neutrality to buy hemp for Britain.

Regarding the British revocation of the orders in council, which has been portrayed as a sincere British attempt to stop the war, I believe Grodzinski makes the same error as virtually all historians, failing to note that the whole offer was conditional on the French doing the same and cancelling Napoleon’s continental system. But the Americans, tied up as they were with France, had no intention of dropping their embargoes against British ships entering U.S. ports. The British knew this, and the revocation was a bit of a sham.

Now fully committed to France, the Americans saw great advantages in acting as the western front of Napoleon’s war against the British. It would help them firm up their new territorial possessions – the purchase of Louisiana had doubled U.S. territory. In addition, the war hawks in the administration, including Peter B. Porter of Buffalo, lusted after the fine virgin lands in the Upper Canadian peninsula. 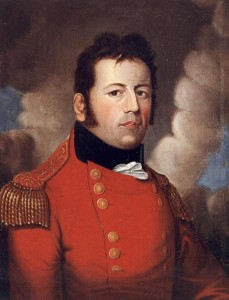 Which brings me to the role of Lieutenant-General Sir George Prevost, British commander in chief during the war. Most historians, Grodzinski included, take the view that Prevost was a put-upon commander, who valiantly held the fort against the Americans in spite of being woefully undersupplied and shortchanged by the War Office. I believe this viewpoint, as well as his dismissal of Isaac Brock’s achievements, is seriously flawed.

First of all, no historian of the war has adequately investigated Prevost’s background and motivations, which were seriously criticized during the war, especially by the Upper Canadians but also by the rank and file in Montreal. I have found evidence to suggest that Prevost, whose uncles were the major financiers of the American Revolution and whose stately progress up the ranks was purchased by those same uncles, may very well have been acting at cross purposes to Brock and other British military professionals in the Canadas. At the very least, this is a subject worthy of further investigation.

Prevost was a strange character. Related closely to land dealers in Pennsylvania and New York state, he was also a nephew by marriage of Aaron Burr, the former U.S. Vice President. In 1804, Burr had schemed with frustrated New Englanders, chafing under Jefferson’s rule, to create a separate republic in the north, a republic that was to include Canada.

While Prevost was supposedly under orders not to rile the Americans and to negotiate a ceasefire, his activities in the first year of the war clearly appalled Brock and his friends and associates in Upper Canada. A case in point: if Brock had received Prevost’s orders in time before he left to capture Detroit, he never would have invaded the United States and achieved that glorious victory, which electrified the Canadians and showed them that the Americans could be beaten.

As it was, Prevost’s naive attempt to broker an armistice with an American administration that had no intention of stopping the war seriously tied Brock’s hands and led to the cancellation of his planned capture of the American naval base at Sacket’s Harbor in the fall of 1812. If he had accomplished this bold stroke, the Americans would have been shut out of control of Lake Ontario and Lake Erie for the remainder of the war. As it was, the following April they were able to attack and burn York.

Clearly a martinet and desk officer who hoarded troops and supplies in Quebec and Montreal, Prevost was not so secretly despised by most of the troops under his command. One or two letters extant suggest that Brock was not at all happy with his commander and shared his feelings with trusted friends in Upper Canada. In particular Brock was appalled at Prevost for not appreciating the need to keep the First Nations onside and preserve control of Upper Canada. John Strachan, rector of York, was particularly scathing:

Our Commander-in-chief has produced all our defeats. If this country falls he only is to blame. Never was a country lost so shamefully as this one has been or will be. Not the smallest vigor has been displayed, there is no campaign plan, everything is left to chance and all our movements are directed not by us but by our enemy. General Prevost appears not only ignorant of the art of war but destitute of common sense.

On several occasions after Brock’s death, his successors in Upper Canada pointedly disobeyed or ignored Prevost’s orders, and were successful in driving back the Americans and capturing major stores of U.S. Army supplies, particularly at Fort Niagara in 1813.

Prevost, for reasons set out in my book, claimed victories for himself that were not merited, seriously alienated French Canadian leader Charles de Salaberry, and lied to his superiors in London. His only two attempts in the field, at Sacket’s Harbor and Lake Champlain, were disasters that could have been victories if it were not for his timidity. Or was it something else which caused him to “throw” both fights when victory was at hand?

No sooner was the war over than Prevost was booted back to London to face a court martial. Alas for historians, he died before he could try to explain his actions in public.

Alastair Sweeny is author of Fire Along the Frontier: Great Battles of the War of 1812 (Dundurn, 2012). Read More