Ideas and the U.S. presidential election of 2008

As I write in mid-October, an Obama victory is expected but still uncertain; you, dear reader, know the result. By focusing on the U.S. presidential election, we risk looking silly, but we could not ignore it. I have to think back to 1968 for an American election that has generated such interest at home and abroad.

Taken together, the articles in this issue provide insights from a distinctly Canadian perspective into the reality framing the U.S. election campaign. Garth Stevenson provides an overview of what constitutes a Canadian perspective on the United States. Bob Chodos and Gregory Baum tackle the religious dimension, and Gareth Morley (in his book review) the judicial. Click to read Observing the Folks Next Door by Garth Stevenson, The Religious Test by Bob Chodos, The Evolving Landscape of American Christianity by Gregory Baum, and Politicians in Robes by Gareth Morley. Claude Couture exposes foibles in the way Americans conduct elections in An 18th Century Electoral System in 21st-Century America, while Frances Boylston writes about how Americans outside the United States get in on them in Voting from Abroad. Columnist Reg Whitaker offers comparisons between the U.S. campaign and the near-simultaneous election taking place in Canada in Ask a Silly Question, Get a Silly Answer. Contributors to the Inroads listserv dissect the charge of elitism that kept surfacing in the campaign.

From my perspective in Sweden, where I am spending the fall teaching North American politics to European students, I very much looked forward to this election. I expected that, in contrast to four years ago, the campaign would afford some real insight into the policy differences and the ideas underlying them that distinguish American conservatives from liberals. John McCain’s nomination gave out the hope that this time the Republicans would run rather than block a campaign of ideas. New York Times columnist David Brooks, who has followed McCain over the last decade, recounted (August 19):

On Tuesdays, Senate Republicans hold a weekly policy lunch. The party leaders often hand out a Message of the Week that the senators are supposed to repeat at every opportunity … John McCain generally … ridicules the whole proceeding … This sort of behavior has been part of McCain’s long-running rebellion against the stupidity of modern partisanship. In a thousand ways, he has tried to preserve some sense of self-respect in a sea of pandering pomposity.

It was a hopeful sign indeed that a senator who negotiated an immigration bill with Ted Kennedy, an election finance law with Russ Feingold and a compromise over judicial nominations, who sought to rein in Guantánamo and exposed corrupt Pentagon contracts, was able to win the Republican nomination. On the Democratic side, Hillary Clinton would have made a formidable opponent in a campaign of ideas.

I was initially unsure of Barack Obama. He looked and sounded too good to be true; his resounding call for change seemed too facile. But then came his March 18 Philadelphia speech on race, which – as it did for Jimmy Carter (interviewed on PBS during the Democratic Convention) – brought tears to my eyes. And reading it made me realize that this man had an extraordinary capacity to unswervingly confront the most divisive issues.

I am disinclined to read books written by politicians, but when Obama secured the nomination I picked up The Audacity of Hope. Written when he was emerging on the national political stage, it displays a solid understanding of the major policy areas combined with unusual insight into both the institutional and the human side of American politics. And it is written in remarkably clean and polished prose.

Beautifully written too was his earlier book, Dreams from my Father. Had Obama remained a community organizer or law professor, it would still be required reading. Dreams reveals remarkable insight into life experience: a childhood in mixed-race Indonesia, adolescence in a white middle-class community in Hawaii, followed by a mainly black peer-group environment in college and on Chicago’s South Side. Most enlightening is a highly textured account of Obama’s experience among his various and varied relatives in Kenya. The end result is a profound exploration of the complexities of race – the issue that has bedevilled American society since its inception.

Prospects for a real debate over ideas thus seemed good, as McCain faced a candidate who had written books that dealt honestly with the most divisive issues of the day. In places like France, politicians are expected to write political books, but in the United States it can be the kiss of death. I remember former labor secretary Robert Reich being demolished by his opponent for the Democratic nomination for governor of Massachusetts in 2002 with selective quotes from his books.

Yet, for all the negativism that has emerged in the campaign, Obama’s opponents have failed to use his expressed ideas against him – itself evidence of the strength of those ideas and his capacity to convey them. It is also a reflection of the effectiveness of his organization: would-be detractors pondering taking phrases out of context know that chapter-and-verse online refutations will follow immediately. Obama won the nomination because his team’s mastery of the Internet, especially social networking sites, got his words and his eloquence out to a great many idealistic young (and not so young) people, bringing in thousands of volunteers and oodles of cash. The volunteers have proved useful not only in getting supporters registered to vote but also in combating the whispering campaign casting Obama as a secret radical Muslim.

It was Obama’s very popularity that brought a change to the McCain campaign. As Brooks wrote on September 25:

McCain started his general-election campaign in poverty-stricken areas of the South and Midwest … where most Republicans fear to tread … It got very little coverage on the network news. McCain and his advisers realized the only way they could get TV attention was by talking about the subject that interested reporters most: Barack Obama … running … the kind of campaign McCain himself used to ridicule.

The key stroke came at the Republican Convention when McCain chose Sarah Palin – someone the old McCain would surely have dismissed from consideration – as running mate. McCain played to the religious right by taking up the theme of small-town family values that Palin symbolized, opposing abortion and promising to appoint “strict constructionist” judges. He sidestepped economic issues, except to echo Bush-Rove: low taxes, cutting back spending and drilling for oil. Behind this new approach was Steve Schmidt, who had worked with Karl Rove on the winning Republican 2002 congressional and 2004 presidential campaigns, where he had run the “war room.” 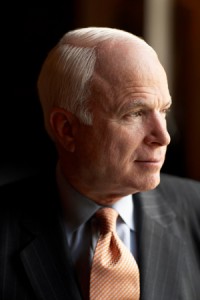 While shoring up the religious right, McCain tried to retain his hold on “independent” voters. When Frances Boylston visited the local GOP campaign headquarters in a Georgia town in mid-September, she could find absolutely nothing in their posters associating McCain, Palin or the congressional candidates with the Republican Party. In his interviews and ads, McCain stressed his maverick credentials. He would clean up the mess in Washington, even when it meant taking on Republicans; he would appoint the best people for the job, regardless of party.

While it meant avoiding a real discussion of ideas, which would have exposed the inherent contradiction between the two McCains, such a two-pronged strategy might have succeeded. But the near-collapse of the financial system in mid-September changed everything. It forced McCain to effectively admit that low taxes and cuts to congressional pork were an inadequate response to the economic situation. He promised that his administration would hold people on Wall Street accountable and bring in regulations to end “reckless conduct, corruption and unbridled greed.”

But his job was made harder when the New York Times revealed that his campaign manager, Rick Davis, had been receiving regular payments from the big mortgage lender Freddie Mac, whose deteriorating finances helped precipitate the Wall Street collapse. And the Obama campaign reminded voters that McCain was one of five members of Congress investigated on ethics charges

for helping Charles Keating, who was convicted of racketeering and fraud after his Lincoln Savings and Loan collapsed, costing taxpayers $3.4 billion.

Obama was responding to a McCain campaign that went increasingly negative as McCain’s position became intrinsically weak. Just as Wall Street was about to collapse, McCain had reasserted that “the fundamentals of our economy are strong”; within days, he was forced to support the bailout of Wall Street. In the new context, his insistence on his differences with Obama over Iraq and Iran in the debates no longer resonated with the audience. At the same time, McCain’s choice of Palin undermined his “experienced hand at the tiller” argument, especially given his age.

In this context, all Obama had to do was stay “on message,” continue to appear as the cool hand on the financial tiller (quite a different Obama from the catalyst of change who mobilized millions during the primaries) and not react in kind to the McCain campaign’s negativism. This became especially important as the McCain campaign escalated its rhetoric, with Sarah Palin telling inflamed supporters that Obama, already identified by his middle name Hussein, is “not a man who sees America the way you and I see America” but one who is “palling around with terrorists.” New York Times columnist Frank Rich suggested that these words were chosen to evoke not William Ayers’s Vietnam-era extremism of 40 years ago – when Obama was a child – but rather the dark-skinned radical Islamic threats of today.

Could it have been different? Could the old McCain have prevailed as the voice of reason, building on his appeal to independents even if it meant taking a certain distance from the tax haters and Bible thumpers? Eschewing the politics of polarization, could he have followed up his support for the bailout with a concrete commitment to a genuinely bipartisan administration, enrolling the best economic minds irrespective of party, putting his money where his mouth was when it came to placing “country first”?

The final test of whether there would be a campaign of ideas came when the treasury, on the day before the third Obama-McCain debate, reported in dollars and cents (which didn’t even take into account the amount that the bank bailout would cost) the bloated deficit America faced. Would there be an admission that the room to manoeuvre on spending and tax cutting was severely limited? Would there be an appeal to those who could do so to pay more taxes and forgo cherished programs in the common interest? McCain, trailing badly in the polls and thus with little to lose, could have given flesh to a heartfelt appeal to country before party.

Electorally, levelling with the voters would have meant doing what conservatives (and liberals/social democrats) in Canada, Germany, France, Sweden and Britain do to get elected: move to the centre. The old McCain would have had no trouble with such a repudiation of polarization politics – indeed he would have welcomed it. Of course there was no guarantee that such a strategy would have worked, but it was certain to make one important contribution: to help wrest American conservatism from the O’Reillys, Limbaughs, Cheneys and Roves, for whom political opponents are enemies to be vanquished by any means available.

And it would have allowed for the kind of discussion of alternative approaches to difficult issues that everyone – not only my students – would have benefited from.