Timothy Lewis’s In the Long Run We’re All Dead is a look at the history of Canadian fiscal policy and the changing position of successive governments on fiscal restraint. Lewis suggests that the shift away from deficit financing has been a direct result of the victory of neoliberal ideas about these issues in Ottawa, and the waning influence of Keynesian macroeconomic analysis.

Lewis puts in historical perspective an alleged shift in Canadian fiscal policy from one of direct involvement in economic activity and “smoothing of business cycles” to a more conservative approach. This shift is coincident – and in Lewis’s account intimately linked -– with what he regards as Canadians’ tragic loss of faith in Keynesianism which, though not entirely discarded, lost its preeminence by the late 1970s. Lewis further suggests that Canada’s liberalization of trade policy, along with the global economic change from protectionist policies toward greater integration, further served to reduce the role of Keynesianism and deficit finance in the tool kit of Canadian governments. 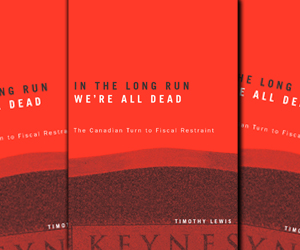 Although the book is an interesting read, I have mixed feelings about it. Lewis obviously has a bias and makes no attempt to hide it. He reminisces about Keynesianism and seems to long for a return to deficit finance in the name of social justice and equity.

We are all allowed our ideological conclusions. However, Lewis seems to lack an understanding of the interplay of economic and political cycles, and this lack of understanding has led to dubious conclusions about government fiscal policy. He should know better than to suggest that all pursuit of discretionary policy is an attempt to return to the golden days of Keynesian economics. Granted, there was a period in Canadian economic policy when deficit finance and government discretionary policy were the norm. It was the common wisdom of the post–World War II era that government had not only a role but also a responsibility in smoothing out the business cycle. This policy worked during the period for which it was designed. However, rising inflation and the concurrent high unemployment rates of the 1970s required a change in direction.

Lewis talks of the shift in public opinion, and growing opposition in the 1980s to undisciplined fiscal behaviour, with an element of surprise. He seems unable to comprehend that the change in public opinion toward deficit financing was not some purely ideological shift of the Zeitgeist. It came amid a rising debt/GDP ratio, rising costs of servicing the public debt and ominous warnings from financial markets about a Canadian public debt selloff. Lewis implies there is nothing wrong with continued deficit finance, that a growing national debt is not a concern and that, even if there were high levels of inflation concurrent with high levels of unemployment, there is no proof that Keynesian policies were to blame.

The tone of Lewis’s argument at times leads me to believe that he is convinced that Keynesian economics – and with it deficit financing – should return. His motivations become clear when he suggests that Brian Mulroney’s victory over John Turner in 1984 was an “indication that the economics of the ‘just society’ were increasingly out of fashion and the economics of Bay Street rather more in vogue.” To Lewis, it is Keynesian economics or nothing at all. To deviate from government tax-and-spend policies (or just spend policies) is to abandon the just society. At this point, Lewis lets his biases and preferences get in the way of objective analysis of the implications of Canada’s pursuit of deficits without end.

Lewis argues that with the election of Mulroney, Keynesianism and the pursuit of social justice died. He later notes that Mulroney’s Progressive Conservative government did little in the way of balancing the budget, and that in fact the deficit continued to grow between 1984 and 1993. However, Lewis cannot acknowledge that the Trudeau Liberals and the Mulroney Conservatives pursued essentially the same fiscal agenda. Under both, fiscal policy remained loose and the ratio of national debt to GDP rose.

Lewis’s weak understanding of economics is apparent when he attempts to link government expenditure levels and the administration of fiscal policy to the government’s conscience. For Lewis, government should be concerned about inflation under extreme circumstances only, perhaps under situations such as existed during World War II. Since the Canadian economy is far removed from any such scenario, Lewis is outraged by those who demand fiscal prudence.

Lewis represents an uncompromising diehard Keynesian view of the world. He has romanticized government spending of money that it does not have. Lewis seems to think that when governments loosen the fiscal restraints, that means that their “conscience” has been revisited by the spirit of Keynes. He ignores the complex interplay between fiscal restraint and any government’s desire for reelection. Mulroney may have been elected on a platform of fiscal conservatism and may have been an advocate of a limited role for government in economic affairs, but this did not mean that his government intended to cut all social programs, as Lewis seems to suggest. In office, Mulroney opted for gradualism through some tax increases and some program cuts. His agenda was, in retrospect, far too timid and forced Jean Chrétien’s government, a decade later, to pursue more aggressive policies of tax increases and program cuts.

There is also the issue of the political expenditure cycle. All politicians typically loosen the purse, so to speak, just prior to an election, in what is supposed to deliver a temporary boost to the economy to garner favorable unemployment and economic growth numbers. Trust Lewis to point to short-term economic acceleration from such spending as a justification of Keynesianism. He doesn’t take into account that in the long run, we must pay back the public debt we thereby create.

This book is ultimately a disappointment not so much because of its message, but rather because of the confusion, lack of focus and weakness of argument. Lewis tries to make the connection between successive federal governments and a politicizing of fiscal policy that allegedly led to the downfall of Canadian Keynesianism. However, deficit finance and government involvement in the economy were not much reduced during the Mulroney years. Furthermore, he treats international pressures, reduced trade barriers, openness of economies, capital flows and other such developments as if they were not factors.

Lewis will be reassured to know that Keynesianism is not entirely dead. Even though it has been moved to the fringe of macroeconomic theory and economic policymaking, in the end, government policymaking implicitly means government involvement and discretionary policy in the uncertain world of macroeconomics. The role of government has been reduced, but it will never be eliminated. Lewis can relax: although his stature is diminished, Keynes lives on.