(Originally published in French as Meursault, contre-enquête in Algeria by Éditions Barzakh, Algiers, in 2013, and in France by Actes du Sud, Arles, in 2014.)

Kamel Daoud is an Algerian journalist and novelist living in Oran, Algeria’s second city. His novel Meursault, contre-enquête won many awards in 2014, and came close to winning France’s ultimate literary prize, the Goncourt. It is not too great an exaggeration to say that Daoud is to present-day Algeria what Albert Camus was to France in the mid-20th century.

Some links between the two are accidents of geography. Both were born in Algeria, Camus to a poor pied noir family in Algiers, Daoud to a policeman. Both were the first members of their families to advance academically. Both had careers as journalists. For many years Daoud has been a columnist for the French-language newspaper of Oran.

More fundamentally, both aspired to force their fellow citizens to face their political and moral contradictions. For Daoud, “Algeria is a country squeezed between heaven and earth. The land belongs to the ‘liberators,’ this vile cast that does not want to die, and which claims to have conducted the on our behalf. And heaven is colonized by the Islamists, who have taken it over in the name of Allah.”

Meursault is a stinging denunciation of the collapse of the ideals of Algeria’s leaders into the present-day reality of a corrupt militarized bureaucratic state, led by Abdelaziz Bouteflika, a 78-year-old veteran of the guerrilla war against the French. Equally, it is a stinging denunciation of the imams who represent the only viable opposition. In the novel’s conclusion, Daoud’s alter ego observes the local mosque, visible from his apartment: “I detest the imam who perceives his flock as if he was a royal intendant. The mosque has a hideous minaret, which brings out my desire to blaspheme: ‘I will not prostrate myself at the foot of a pile of bricks.’” 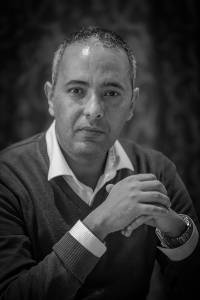 The contre-enquête of Daoud’s novel begins as a critique of Camus, the pied noir. In the climactic scene of Camus’s L’étranger, Meursault, the novel’s central character, is on an Algiers beach on a blindingly hot summer afternoon. His life is meaningless; he is adrift; he sees an Arab, unnamed in the novel, holding what might be a knife. Meursault shoots and kills him. He is prosecuted and executed. He offers no legal defence and vehemently denounces the priest who comes to his cell in search of Meursault’s confession.

The central character of Daoud’s novel is Harun, brother of the unnamed Arab murdered by Meursault. Harun criticizes Camus who, allegedly like all pieds noirs, thought Arabs not worthy of being fleshed out as complex characters in a novel. Adding insult to injury, Camus did not even deign to name Musa, Harun’s long-dead brother.

In Meursault, Daoud drags the reader into an unsettling literary universe, an Algerian mirror of Camus’s critique of bourgeois life in post–World War II Paris. Not content to use L’étranger as catalyst to motivate the story, Daoud pays homage to Camus by copying the structure of the most perfectly crafted of Camus’s novels. La chute is a first-person confession by Jean-Clémence, a formerly comfortable Parisian, conducted in an Amsterdam bar for the benefit of a stranger – you the reader. Starting with the protagonist’s name (whose initials are J-C) and the title, the novel has obvious Christian references.

Dostoyevsky was one of Camus’s literary influences. Would Camus have copied Dostoyevsky’s evolution, from a radical youth in the 1840s to a mature novelist sympathetic to the Russian Orthodox Church in the 1870s? Perhaps. But a few years after publication of La chute, Camus and his editor died in a car crash. Although probably not in a car crash, Daoud’s career may also be abruptly snuffed out – either in one of Bouteflika’s prisons or at the hand of some religious extremist.

The confession in Meursault is that of Harun. In a bar somewhere in Oran, Harun confesses to an unnamed literary researcher who has tracked down the brother of Meursault’s victim as part of his research into L’étranger. In the course of the confession Harun admits that he, like Meursault, has committed a pointless, unjustified murder. The day after peace was declared in the Algerian independence struggle, he killed a pied noir cowering in the family barn.

Meursault is a demanding novel. To appreciate it fully, the reader should be simultaneously familiar with Camus’s intellectual concerns and with the political history of Algeria. That makes for a small audience. Furthermore, until now it has been available only in French. Most Algerians do not read French, which is probably the reason Daoud is free to write. Most of the French have lost interest in Algeria. In North America, few understand French.

Nonetheless, Daoud’s first novel is a tour de force. Daoud has antagonized Salafist imams in Algeria. He is subject to a fatwa. He has excited the Parisian literary elite, as is evident from his near-win of the Goncourt. Recently, he achieved the honour of a lengthy profile in the New York Times Magazine.1 The New Yorker published an excerpt from Meursault in English on April 6. The novel is due out in English translation in June.