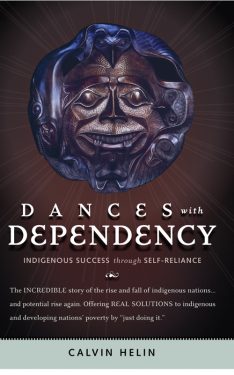 On the cover of Dances with Dependency, Calvin Helin is described as a “determined lawyer, karate instructor, and businessman.” But … he is also son of a family of Tsimshian chiefs in northwestern British Columbia. And he has illustrated the book with his cousin’s paintings. Some of these are realistic, if romantic, representations of the Pacific northwest. Others are in the abstract tradition of northwest native art. Throughout this book, Helin is juggling a double identity: that of his ancestors and that of a professional lawyer, successfully integrated into the Canadian economy. The juggling act is impressive, even if he falters in the end and a few balls fall to the ground – more on that later.

University library stacks across Canada are groaning under the weight of books, reports and academic articles written over the last quarter century on the Aboriginal plight. This writing uniformly blames the white “settler population” for the malaise of contemporary Aboriginals and uniformly looks to expansive treaty rights and larger Indian Affairs budgets for a solution. Helin is as unsparing as anyone writing within this orthodoxy in his critique of past and present government policy. What makes this an “astonishing book” (to use the wording of the cover) is his insistence that Aboriginal leadership is complicit in perpetuating the Aboriginals’ malaise, and that solutions must be based on Aboriginal entrepreneurship and employment.

In the interest of full disclosure, I mention that Helin quotes from my writing. As do I, he concludes that a core aspect of Aboriginal distress is to be found in Ottawa’s funding of passive social assistance. Only Ontario and Quebec finance larger welfare caseloads than does the federal Department of Indian Affairs. With approximately 40 per cent of the on-reserve population in receipt of welfare, Ottawa has created a massive “welfare trap” (Helin’s term) that serves “to reinforce dependency and directly resulted in a complex web of social and political pathologies.” He goes on to describe a “culture of expectancy”:

An expectation that all means for ordinary existence (social assistance, housing, education, medical and dental care, community infrastructure finance, and finance for operation of community governments, etc.) will be provided externally, with no expectation that effort must be expended or such items earned. Our Aboriginal ancestors of antiquity would find such an expectation utterly astonishing … As a youth, if I were to suggest to my father, a hardworking commercial fisherman, that I deserved a fishing trip crew share when I had not done any of the work to earn it, I would quickly have been introduced to the business end of his gumboot.

This “culture of expectancy” is not some anomaly unique to Aboriginals. Helin’s thesis, with which I fully agree, is that any community, Aboriginal or non-Aboriginal, with 40 per cent reliance on social assistance will, with the passage of time, develop such a culture.

What’s to be done about this?

The first answer Helin offers can be summarized as a combination of education reform and respect for entrepreneurship.

The encouragement of reserve-based business entrepreneurship is at the heart of his message. He points with legitimate pride to several success stories across Canada, such as that of the Osoyoos band in the Okanagan. Good band leadership plus business acumen has spawned a number of successful business ventures.

On the matter of education, Helin is at pains to insist that cultural sensitivity is not enough: rigorous instruction in the basics is essential. After surveying census data on the Aboriginal–non-Aboriginal gap in education outcomes, he points to success stories of schools that work, such as Grandview Elementary School in East Vancouver. This is an urban off-reserve school. I would have liked him to say more about the problems of reserve-based schools. Across Canada, the worst education outcomes for Aboriginal children are on-reserve. It is here where the need for reform is most urgent. Schools run by individual bands do not, as a rule, escape the politicization of band affairs. To achieve better on-reserve results, some form of Aboriginal-run school boards that remove school administration from local band councils will have to be established. Modest steps in that direction are taking place in British Columbia. But in general, the Department of Indian Affairs has responded to the failed history of residential schools by abandoning all responsibility for the quality of reserve-based education.

Helin displays a great deal of courage in confronting the orthodoxy among writers on Aboriginal problems. Furthermore, he combines his critique with a profound respect for his cultural heritage. No one can accuse Helin of advocating assimilation in the tradition of Trudeau’s White Paper or National Post columnists.

Where Helin’s juggling act falters is in discussing urban Aboriginal prospects. As late as the mid-20th century, only 10 per cent of Aboriginals in Canada lived in a city. By the 2001 census, one half did. Counting all who identified in the census as Aboriginal – whether as Indian, Métis or Inuit – fewer than a third lived on-reserve. With a half-century lag, Aboriginals are doing as did southern ex-slaves in the United States following the Civil War. They first became sharecroppers; then, in the first half of the 20th century, a massive rural-to-urban migration took place as blacks became city dwellers. Over the second half of the 20th century, Americans of good faith – both black and white – have pursued policies of affirmative action to integrate blacks into the education system, and to insist that employers hire and promote them. Black Americans still face serious problems, but they are now inextricably part of urban America.

Another answer Helin offers to the question of what’s to be done is to leave the reserve. He notes that about half of all registered Indians (those who have the right to live on-reserve) are “voting with their feet … live outside of reserve communities, primarily in urban areas where there are, quite simply, better employment, educational and economic opportunities.” He goes so far as to suggest that urban Aboriginals “likely hold the long-term key to the successful integration of Aboriginal people in rural communities into mainstream society.” But he does not discuss the urban reality in much detail. In a book of 16 chapters, he devotes only one chapter to urban Aboriginal prospects.

The urban population is polarized. Many are faring reasonably well, and are slowly constructing an Aboriginal middle class in the cities of western Canada. Some are in dire straits, however, living in what are urban ghettos in Winnipeg’s North End, Vancouver’s Downtown Eastside and similar neighbourhoods in other western cities. In these neighbourhoods, Aboriginal employment rates are very low, as are education levels. With obviously damaging implications for children’s schooling, families move back and forth between a marginal urban and a marginal rural – maybe reserve-based – lifestyle.

Helin realizes that, even with the best band governance, only a minority of reserves are likely to replicate the success of the Osoyoos. He also wants an end to the “welfare trap.” If band councils ever followed his advice, if they eschewed nepotism and hired solely on merit, if they copied non-Aboriginal social assistance policy and severely restricted welfare access among the employable, they would provoke massive off-reserve migration. What then? At that point, provincial and municipal governments would be obliged to cease their foot-dragging and launch massive affirmative action programs similar in kind to those in the United States over the last half-century.

Helin does not pursue this line of thought. Nor do non-Aboriginals. The greatest disservice to Aboriginals arises from the intellectually lazy assumption among ordinary Canadians that reserve-based leaders, who represent only a third of the total Aboriginal population, adequately speak for the other two thirds. Why, it should be asked, are provincial politicians not as engaged with affirmative programming as are their U.S. counterparts in the case of black rural-to-urban migration? Why are they not doing their utmost to render the urban option attractive to those rural Aboriginals who want it?

To sum up, the two thirds not on-reserve need people to speak for them who are as eloquent and as prepared to break with orthodoxy as is Helin.