On June 26, 1970, in Quebec’s National Assembly, Claude Castonguay, the new minister of social affairs, was introducing the bill that would set up the province’s public health system. He had just begun his speech – or rather a recitation in his habitual grave monotone – when a page brought him a note signed by Jean-Noël Tremblay, an acerbic opposition member. The note read, “If you keep up this tone, the anesthetists will sue you for unfair competition.” 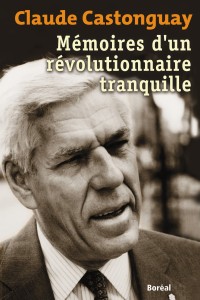 When it comes to political show business, Castonguay is indeed a poor performer, both on stage and – as demonstrated in his Mémoires d’un révolutionnaire tranquille, recently published without much fuss in Quebec and even less elsewhere in Canada – in his writing. Too bad, because this is the richest political essay published in Quebec since the beginning of the century. It is an important book because of the author’s stature and because of his enlightening reflections on two fundamental issues: the place of Quebec in Canada and safeguarding our public health system.

An architect of modern Quebec

One of the first francophone actuaries in Canada and founder of the actuarial school at Laval University, Castonguay presided over Quebec’s royal commission on health care in the 1960s and was later, as a minister in Robert Bourassa’s first government, responsible for its implementation. After three very active years in politics – he was labelled “the conscience of the Liberal government” – he returned to private business and was one of the main architects of the financial group La Laurentienne. He could have succeeded Bourassa as leader of the Quebec Liberal Party in 1977, but he preferred to leave the field open for Claude Ryan, then editor of the Montreal daily Le Devoir.

A giant of modern Quebec, Castonguay has had a career combining business and politics, and has been an eminent witness to a period in which the business elite of Quebec Inc. replaced the mandarins of the Quiet Revolution. The title of his book is thus an apt one. These memoirs, sober and solid as their author, contain many delightful anecdotes about the great political actors of the Quebec scene: Lesage, Johnson, Trudeau, Lévesque, Bourassa, Parizeau, Chrétien, Ryan, Mulroney, Bouchard, Landry and others. Perhaps more significantly, they dwell on the two fundamental commitments of his political career: health care in a public system and Quebec in Canada.

Adapt the public system to save it

The first major area of Castonguay’s concerns is the very explosive question of health care, with which he has been so closely associated, as technocrat and political leader, that Quebecers use the term castonguette to refer to their public health cards. He still sees himself as a fervent social democrat, but life has taught him to be as suspicious of the excesses of the left (a heavy and restrictive bureaucracy) as of the right (extreme laissez-faire).

He believes that it was sound politics in 1970 to prohibit a parallel private system in the legislation establishing the public health care system, which was then able to take care of everybody. But he now sees that the system can no longer fulfil its mission of treating everyone who needs it. In refusing to adapt to change, we are no longer maintaining equal access, but rather lack of access.

The task is therefore to closely supervise the necessary private contribution required to save the public system, instead of repeating simplistic denunciations of two-tier health care or Americanization. According to the system’s creator, excessive polarization is an important factor in making it impossible to hold a rational discussion of the real problems facing Quebec’s public system. His position here is similar to the views expressed in the manifesto For a Clear-Eyed Vision of Quebec, issued late last year by 12 prominent Quebecers.

Two remarks summarize his position: the system has become weighed down and we cannot find the money to keep it going. We must therefore trim it and find new sources of revenue, supervising this necessary adaptation closely so that the public system isn’t jeopardized in the process.

Another brand of federalism

On the question of Quebec in Canada, Castonguay is still a federalist, but his most biting jibes are directed at the federal establishment: the mandarins of the public service and, even more, the political leaders Trudeau and Chrétien who, according to him, deceived Quebecers after the federalist victories in the 1980 and 1995 referendums. He admires Trudeau’s “charisma, intelligence and resoluteness” but deplores his “rigidity, arrogance and contempt.” He was chancellor of the University of Montreal when an honorary degree was granted to Trudeau but he couldn’t bring himself to talk to him. Of Chrétien, he says that the man “never had the stature to recognize a single error.”

Beyond personalities, however, he believes that the federal Liberals’ policies were responsible for the failure of constitutional negotiations, including the Meech Lake Accord negotiated by Brian Mulroney, for whom he is full of praise: “A great prime minister who has left a lasting legacy. I hope that history will grant him the place he deserves in Canada.”

As Castonguay sees it, in Trudeau’s Canada Quebec had to be a province like the others and everything had to be directed from Ottawa. This meant a rigid, centralized federal state and the negation of the nation of Quebec. Facing these dogmas, many federalist nationalists in Quebec became separatists.

Castonguay shares these separatists’ frustrations, even using the word nausea to describe his reaction to Trudeauism, but he remains a federalist because of the economic uncertainty that a rupture with Canada would provoke. “By ancestry, culture, language and values, I am first and foremost a Quebecer,” he writes in his memoirs. “At heart I am a nationalist. History has also made me a Canadian citizen. My belonging to Canada is, however, in large measure a matter of reason. Canada, which has always been a tremendous challenge, remains for me a success, except for the place of Quebec.”

Castonguay is a perfect illustration of the tragedy of the Quebec federalist nationalists whose vision of Quebec in Canada was crushed by Trudeau. Trudeau was able to carry this off because of his exceptional charismatic personality along with a combination of circumstances that baffled many people. His name, after all, was Trudeau and he led what was called the “French Power” movement in Ottawa. Furthermore, just as any minority prefers to choose one of its own to protect its interests, Quebec instinctively gave him its support, sometimes with 74 out of 75 seats in Parliament. All appearances suggested that Trudeau spoke for francophone Quebec.

The appearances, however, were deceptive. Trudeau shared and stood up for an Anglo-Quebec vision of Canada. This was a legitimate vision, to be sure, but it’s misleading when your name is Pierre Trudeau. Mordecai Richler and William Johnson, two brilliant and insatiable Quebec-bashers, understood: they saw Trudeau as the only decent political leader in Canada.

To unlock the constitutional impasse, Castonguay postulates two sine qua non conditions: recognition of the Quebec nation within Canada and limitation of Ottawa’s spending power. The idea of limiting the spending power, a proposal that was already fashionable in Quebec in the seventies, is not very different from what we now call addressing the fiscal imbalance. “Each government must collect only the taxes needed to fulfil the duties of its jurisdiction,” Castonguay recommends in 2005.

“I cannot but ask myself how history would have unfolded differently in Quebec and Canada in the last 30 years if the Trudeau government had agreed to deal with the real problems instead of looking at the Quebec nationalism as a form of tribalism,” he writes. “And yet saw Canadian nationalism as a sign of the vitality of the whole of Canada.”

It would be valuable, even essential, for this book to appear in an English translation, particularly at this moment of a changing of the Trudeauist guard in Ottawa. Instead of waiting for the second coming of the Messiah, Bob Rae (now a candidate for the leadership of the Liberal Party), Jeffrey Simpson of the Globe and Mail and their allies at the Toronto Star should read Castonguay’s memoirs.

It is important indeed that Canadians be told, by a believable messenger, that the choice was not only between Trudeau federalism and separatism, as the Anglo-Canadian intelligentsia of Montreal and Toronto have repeated ad nauseam. There is also another brand of federalism, sought by Mulroney and Castonguay – and perhaps by Harper – that sees Quebec nationalism not as an evil to be rooted out but as a force to be integrated into the Canadian whole.