When the dark wood fell before me
And all the paths were overgrown
When the priests of pride say there is no other way
I tilled the sorrows of stone
— Loreena McKennitt, “Dante’s Prayer”

The most dramatic moment in President Donald Trump’s speech to Congress on February 28 came when he addressed Carryn Owens, the widow of a Navy SEAL who was killed in a raid on an Al Qaeda target in Yemen in late January. Senior Chief William (Ryan) Owens “died as he lived,” Trump said:

a warrior, and a hero – battling against terrorism and securing our Nation. I just spoke to Mattis, who reconfirmed that, and I quote, “Ryan was a part of a highly successful raid that generated large amounts of vital intelligence that will lead to many more victories in the future against our enemies.” Ryan’s legacy is etched into eternity. For as the Bible teaches us, there is no greater act of love than to lay down one’s life for one’s friends. Ryan laid down his life for his friends, for his country, and for our freedom – we will never forget him.

Initial media comment was effusive. “What the President did w Owen’s widow was capital P Presidential,” noted Katy Tur of NBC. Citing this and other moments in Trump’s speech, Chris Wallace of Fox News said, “I feel like tonight Donald Trump became the President of the United States.”

Questions about whether the Yemen raid lived up to Trump’s characterization of it were left to outlets such as the New Yorker, where Amy Davidson wrote that “Owens was killed in an operation in Yemen that Trump had authorized, and which appears to have gone very badly, with probable civilian deaths, the alienation of the Yemeni public, and exaggerations about the intelligence gained,” and John Cassidy pointed out that Bill Owens, father of the slain Navy SEAL, was demanding an investigation into the mission that led to his son’s death. An earlier New York Times article on the raid summed it up by saying that “almost everything that could go wrong did.”1

Of course there are differences. It is unquestionable that the four Canadian divisions that launched the attack on April 9, 1917, did, in fact, dislodge the Germans and capture the ridge. The problem is with the wider context, and especially with the claim, frequently repeated in this year’s observance of the centenary of the battle, that Vimy represented the birth of the Canadian nation – what Ian McKay and Jamie Swift, in their new book The Vimy Trap, call “Vimyism.”

The Vimy Trap is a historiography of Vimy, and of Canada’s participation in the First World War more generally – supplemented by an extensive and useful bibliographic essay. It is not so much about the war itself as about its representation in the years since in books, newspaper photos and their captions, painting and sculpture, films, radio documentaries, exhibits in the Canadian War Museum, even video games. It is about the impact of Vimy on our sense of ourselves.

Though full-blown Vimyism is a relatively recent phenomenon, different conceptions of the war have been in competition in the entire century since 1914. During the war itself, the official attitude toward the war was expressed in what historian Paul Fussell, cited by McKay and Swift, called “High Diction”: the language of honour, valour and sacrifice. Even then, High Diction ran up against the “Low Reality” of the war, a notable expression of which was Fred Varley’s grim 1918 painting For What?

A current of disillusionment ran through the postwar period, and among the most disillusioned were the returned soldiers themselves. Erich Maria Remarque, whose 1929 novel All Quiet on the Western Front typified the “Literature of Disillusionment” of that period, was a veteran of the Western Front; so was the Canadian Charles Yale Harrison, author of Generals Die in Bed (1928). 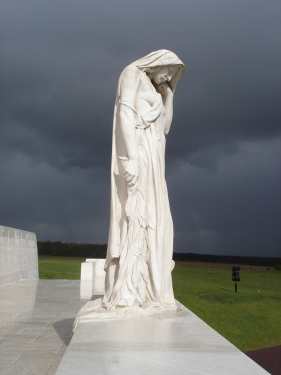 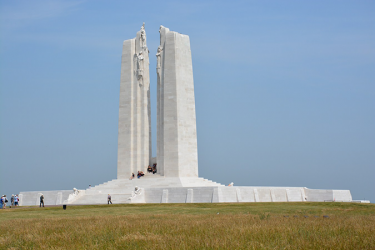 This mood was reflected in the creation of the imposing monument to Canada’s war dead that was dedicated at Vimy Ridge in 1936. In the Canadian National Vimy Memorial’s dominant figure, sculptor Walter Allward portrayed Canada as a grieving woman, “Canada Bereft” as he called her or Mother Canada as she is popularly known. At the top of the monument’s twin pylons are the symbolic figures of Justice and Peace, with other symbolic figures below. The Vimy Memorial, a familiar image that graces the reverse side of the 20-dollar bill and says “Vimy” to many Canadians, is far from being Vimyist.

And while there were echoes of Vimyism in some of the speeches at the dedication ceremony, others, like that of United Church minister George Oliver Fallis, took on a very different tone. Evoking John McCrae’s plea in “In Flanders Fields” to take up the dying soldiers’ quarrel with the foe and hold high the torch they threw, Fallis urged his listeners to “finish their task and make real their vision of a world swayed by peace and brotherhood.” McKay and Swift comment, “The ‘foe’ with whom one should quarrel, in this 1936 vision, was war itself.”

But after King Edward VIII dedicated the Vimy Memorial, attitudes began to harden. “From the mid-1930s,” McKay and Swift write, “martial nationalism would start to make claims for Vimy that were scarcely credible and would have been generally unrecognizable in 1917 … There was a sense that, after the opening of the monument in 1936, Vimy and the Great War attained a certain untouchability in Canada.”

Still, it took another few decades before Vimyism really began to take hold. Its central creedal statement is the work of Brig.-Gen. Alex Ross, who fought at Vimy and later became a leading figure in the Canadian Legion: “It was Canada from the Atlantic to the Pacific on parade. I thought then, and I think today, that in those few minutes I witnessed the birth of a nation.” While Ross may have expressed similar sentiments earlier, this formulation comes from his introduction to a 1967 book by Eberts Macintyre, Canada at Vimy. And Vimyism would have to wait another two decades for its core scriptural text, Pierre Berton’s 1986 book Vimy. As McKay and Swift write, “The ‘Battle of Vimy Ridge’ that has captivated many a Canadian mind – from Don Cherry to former prime minister Stephen Harper to historian Tim Cook – is, to a large extent, the Vimy of Berton’s heroic story.”

In Berton’s telling, the story was one of hardy Canadian frontiersmen whose fortitude, resourcefulness and independence of mind allowed them to accomplish things that the regimented soldiers of Europe could not. But McKay and Swift raise some pointed questions about Berton’s story, and about the Vimyist account of the battle in general. They note that most of the soldiers at Vimy came not from the frontier but from the urban working class. Far from being “innocents abroad,” as Berton portrays them, they engaged in such “brutal tactics” as prisoner-killing and trench-raiding (that Berton himself reports such activities leads McKay and Swift to call his book a “subtly self-subverting text”). The units that won this “Canadian” victory were fully integrated into the British Expeditionary Force. And far from promoting Canadian national unity, Vimy had a “quite unexpected consequence”:

After Prime Minister Borden went to France to visit the wounded of Vimy Ridge, he returned home to Canada in May convinced that the country should move ahead on compulsory military service. Shortly after that, on 24 May, Montreal became the scene of anti-conscription riots. Rather than leading the country almost magically to attain new levels of unity and togetherness, Vimy Ridge was the prelude to an unprecedented conflict in Canada so serious that it raised the prospect of the country’s violent dissolution.

With this background, it is not surprising that Vimyism has never caught on in French Quebec. Indeed, even though Vimy is supposed to represent a key moment in Canada’s achieving independence from Britain, it has been largely a British Canadian phenomenon, and it took hold precisely when the idea of Canada as an essentially British country was beginning to fade. “Vimy as the national origin story can be welcomed without inner reservations mainly by those Anglo-Canadians who retain a fond regard for the British Empire,” write McKay and Swift. “Since the 1960s the members of this group have become a minority – yet one retaining vast political resources and cultural power. In a country of minorities … Vimyism – promoted by a powerful, determined, and affluent minority – fills a cultural void.”

McKay and Swift favour a very different style of war remembrance, typified by a pair of statues by German artist Käthe Kollwitz, which stand in a German military cemetery in Belgium where her 18-year-old son, killed in 1914, is buried. They note that Kollwitz’s work, The Grieving Parents, “has no trace of patriotic bombast.” Rather, it expresses grief for her son, for all the victims of the war, and for her generation’s failure to prevent the catastrophe. A more recent example of appropriate commemoration in the Ring of Remembrance in Ablain-Saint-Nazaire, France, not far from Vimy Ridge, dedicated on November 11, 2014. Consisting of 500 metal panels, it contains the names of nearly 600,000 soldiers on both sides killed in northern France, listed alphabetically without regard to nationality or rank.

Another elaborate ceremony took place at Vimy Ridge on April 9, 2017, to commemorate the 100th anniversary of the battle. While there were notes of Vimyism in the ceremony, especially in Prime Minister Trudeau’s speech, the dominant mood was more subdued. Trudeau evoked the familiar tropes of the battle bringing Canadians together and allowing Canada to stand as an independent actor on the international stage. But under the brooding figure of Mother Canada, in a battlefield still pockmarked and dotted with unexploded shells, Loreena McKennitt’s “Dante’s Prayer” better suited the occasion. François Hollande of France, in the waning days of his presidency, had the grace to remember the German soldiers who died as well as those of France, Britain and Canada. Even Trudeau, after his Vimyist excursion, concluded his speech with a passionate call for peace and the words “Never again.” In the CBC’s coverage of the event, Peter Mansbridge and others noted that the capture of Vimy Ridge did not change the course of the war.

Perhaps the high tide of Vimyism has passed and Canada can move on to a more sober assessment of its military past. Perhaps Canada has matured to the point where it no longer needs a battle to define its identity. Perhaps the world is slowly finding better ways to resolve disputes than the use of force. Perhaps.

On April 6 (coincidentally the 100th anniversary of American entry into the First World War), President Trump ordered a missile attack on a Syrian air base in response to the Syrian regime’s use of chemical weapons. Once again commentators declared his move presidential (there had been some backsliding since his February speech). Once again, “Donald Trump became President of the United States” – this time according to Fareed Zakaria on CNN.

Whether or not the West should intervene militarily in Syria is a complex issue. Those who favour such intervention have some cogent arguments on their side.2 But evidence of any long-term, thought-out strategy behind Trump’s action is lacking. This is not supposed to concern us. “The motto seems to be: ‘when in doubt, go to war,’” noted Arthur Milner on the Inroads listserv. “Any leader will do. Trump sends a few dozen missiles and suddenly the liberal warmongers decide he’s presidential after all.”

A battle makes a nation. A missile strike makes a presidency. How we remember war affects how we think about it now. McKay and Swift’s account of how we remember Vimy is of more than historical interest.