As I write this, the British Columbia teachers have returned to work, following a strike of several months. Depending on whom you listened to, the union or the government, it sounded like two entirely different events. The main mystery for me is why the government didn’t force the teachers back to work earlier – in time for the normal start of classes in September. Presumably they wanted to teach the teachers a lesson. In any case, it’s clear that both management and union had priorities other than the education of children.

During the strike, I wondered more than I usually do why public servants have the right to strike in the first place. Public sector unions are different from private sector unions. Private sector workers are engaged in an economic battle with owners. They gamble that the company will prefer higher labour costs to lost revenue. But it’s a big gamble: a strike can drive the enterprise out of business or out of town.

No such concern exists for public sector workers. Theirs is a political battle. A public service strike inconveniences the public, and the pressure on government is indirect. Workers will lose wages, but not their jobs. 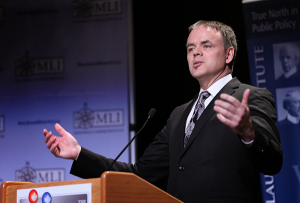 It’s hard to find agreed-on numbers comparing wages and benefits in the public and private sectors. In a debate hosted last year by the Macdonald-Laurier Institute, Jim Stanford,an economist with the Unifor trade union, argued that governments have “the power to ‘solve’ their labour relations problems by simply dictating a settlement. The potential for misuse of this confluence of fiscal interest and political power is enormous.”1 He acknowledged that “average earnings in the public sector are 5 to 10 per cent higher than economy averages (depending on how they are measured) – but education and credentials are significantly higher too. Comparing similar occupations and credentials, it’s largely a wash. Hence, he said, “Tilting at public sector unions is all about politics, not economics.”

Arguing the other side, Professor Tom Flanagan contrasted private with public sector bargaining. In the public sector, he said,“gains extorted through repeated use of strikes and strike threats may lead to reductions in service,” but the reductions “will not necessarily be in the sector where strikes have driven up compensation.” Thus, “aggressive collective bargaining may well kill someone else’s goose.”2

Flanagan cited a recent study that, after controlling for a dozen variables known to influence earnings, including gender, age, education, experience, province of residence, size of employer and nature of employment, found that public sector employees are paid on average about 10 per cent more than unionized private sector workers with similar qualifications and experience.3 Public sector workers were “much more likely to have a generous pension plan, retire earlier, have greater job security, get longer paid vacations, and take more sick days.”

Of course, even if public sector employees do have an unfair advantage over their private sector counterparts, why begrudge them their good fortune? Isn’t it a bit like the proverbial Russian peasant who, offered anything he desired, said, “My neighbour has a goat and I don’t – kill his goat”? Shouldn’t private sector workers and unions just fight harder for better pay and benefits?

The problem is bigger than that. The public sector advantage has broad implications for left-wing political parties. Public sector strikes are a left-wing government’s Achilles heel: give in to union demands, you open yourself to accusations of profligate spending; put up with a long public sector strike, you look helpless and incompetent; legislate strikers back to work, you risk losing labour votes and campaign workers.

And efficient public services are central to a left-wing conception of society. Public sector strikes undermine the left’s ability to deliver on that promise. And the perception of public service privilege leads to the conviction that increased funding for services will result in increased wages for public servants rather than improved or expanded delivery of service.

The left doesn’t usually talk about these problems in public, but there are exceptions. In the prologue to his How We Almost Gave the Tories the Boot, Brian Topp describes his experience with the Saskatchewan NDP. Its near-defeat in 1999, he writes, was the result of rejection by rural voters and “a tactically opportunistic and strategically mindless nurses’ strike, timed by that union’s leaders to politically blackmail our government.”4 Then, a few pages later, discussing David Miller’s successful campaign for the Toronto mayoralty, Topp goes further:

The bitter public-sector strike that preceded Mayor Miller’s announcement in the fall of 2009 that he would not run for a third term had a familiar ring to veterans of NDP governments. Public-sector bargaining is perhaps one of the left’s proudest achievements in Canada. It is also perhaps our greatest gift to the political right .5

According to Richard Littlemore in the Globe and Mail, the proportion of private sector workers who belong to a union in Canada “has collapsed. In 1984, it was 26%. Today … it’s 17% and falling.” On the other hand, public sector membership “hit 72% by the mid-’80s and has stayed in that range ever since.”8 Littlemore suggests that one consequence is “a serious souring of public sentiment”:

Members may see value in their union cards, but for large swaths of the public, unions have a serious image problem: They’ve gone from being the folks who brought you the weekend to being the folks who deny you the services for which you pay your taxes.

Before the complexion of unionism went civil-servant, workers in the private sector tended to aspire to union membership. But now, non-union members of the public are more likely to resent union protections, especially when it seems that civil servants are getting fat (and retiring happy) on taxes paid by the unorganized.

He doesn’t provide much evidence, but you can easily find the evidence by reading the “comments” on articles about the public service in the online version of any of the major daily newspapers. They are overwhelmingly anti–public service and often drip with resentment. Public servants are seen as lazy and overpaid, using their leverage with friends in government to win undeserved privilege – at the ordinary person’s expense. Largely absent is any notion that government expenditures – on education, health care, transportation – help the underprivileged. 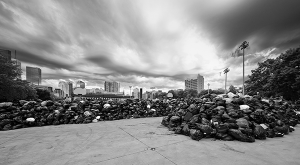 Littlemore, like Topp, sees evidence of the backlash in the 2009 Toronto garbage strike:

Public resentment over the garbage that piled up in parks during the 2009 strike helped catapult the notorious Rob Ford into the mayor’s chair. In an administration dogged by controversy, one of Ford’s clearest victories has been to contract out a large number of garbage-collecting jobs that had belonged to CUPE members. The public outcry over this was notable by its absence.

Should the left support banning public sector strikes? There are better options. According to Juhana Vartiainen in “Interpreting Wage Bargaining Norms,”

From the mid-1990s onwards, Swedish wage bargaining has been characterised by informal co-ordination of the wage claims of big unions and bargaining cartels. In particular, it has been understood that the manufacturing sector should lead by first agreeing on a pay increase, whereafter the service sector and public sector unions choose a similar increase.7 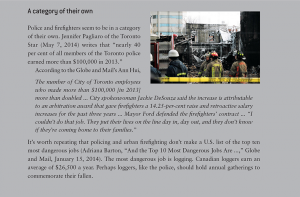 In other words, the manufacturing sector settles on a wage and the service and public sectors follow. Canada lacks the “bargaining cartels” and other structures that are conducive to such an arrangement, and Canadian labour and management show no signs of wanting them.

Nonetheless, here’s my suggestion: public sector unions should volunteer to have their increases tied to some aggregate of settlements in the private sector. If Jim Stanford is correct that public sector workers are not a labour aristocracy, then it won’t much affect public sector wages anyway. But it will undercut certain unions’ abilities to hold left-wing parties to ransom during elections; more important, it will immediately undercut public distrust of public servants, left-wing parties and state provision of social services. And in the long run, it will be in the overall interests of public servants, as it will restore some measure of respect to the public service and encourage public sector growth.

Will that happen? I wouldn’t bet on it. But maybe the first step is admitting that we have a serious problem.

6 Richard Littlemore, “Do Unions Have a Future?”, Globe and Mail, March 27, 2013, retrieved from http://www.theglobeandmail.com/report-on-business/rob-magazine/do-unions-have-a-future/article10310754/?page=all#dashboard/follows/

Arthur Milner is a playwright and theatre director, and Inroads’ culture columnist. He lives in Val-des-Monts, Quebec.