The Prime Minister was delivering an apocalyptic warning to his country. Like an ancient Hebrew prophet, Stephen Harper conjured a satanic spectre: “A great evil has been descending over our world, an evil that has been growing more and more powerful.” This ogre is “violent jihadism … one of the most dangerous enemies our world has ever faced.”

Harper was speaking with the conviction that comes from personal experience. After all, he had only recently emerged from the closet where he hid while a “violent jihadist” was gunned down by the parliamentary Sergeant-at-Arms. Out of the closet, he had morphed into the Avenging Angel, and he had a lethal weapon of his own: Bill C-51, The Anti-terrorism Act 2015. But what is this weapon pointed at?

Last year, a mentally disturbed young man in Moncton, Jason Bourque, who had conceived a violent antipathy to police, without provocation shot and killed three RCMP officers. This was terrible, but it was, by common consent, a law enforcement problem resolved by the police who arrested Bourque and the courts that sentenced him to 75 years in prison.

A few months later, another mentally disturbed, sometimes crack-addled young man, Michael Zehaf-Bibeau, armed with a 19th-century vintage hunting rifle, shot and killed Nathan Cirillo, a young soldier peacefully standing guard at the National War Memorial in Ottawa, then shot his way into the Centre Block of Parliament before his own violent demise. That too was terrible, and apparently something far worse than a mere law enforcement problem: a “great evil descending over our world.”

Besides frightening the Prime Minister into a closet, how exactly did Bibeau differ from Bourque? Bourque just hated cops, while Bibeau had attached his personal demons to extremist Islamist gibberish and to a trendy brand name, Islamic State, to which this generation of violent wingnuts happens to be attracted. A few years down the road, the next generation of Bibeaus may be invoking the Global Movement to Liberate Chickens from Factory Farms. But today the words Islamic State are a trigger setting off Apocalypse Now. 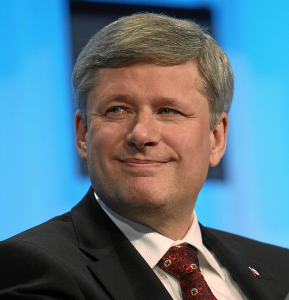 To be sure, there is a real force calling itself the Islamic State that is armed to the teeth, ruthless, cruel and a genuine threat: to Syria, Iraq and the Middle East. To Canada, not so much. There have been attacks here, including another soldier tragically killed in Quebec, and other plots apprehended and disrupted by good police work. But there is no credible evidence that any of these have been planned, financed and directed from inside the Islamic State high command in Syria, the way that 9/11 was orchestrated from Osama bin Laden’s HQ in Afghanistan. There are deluded young Canadians, along with even larger numbers of deluded young Europeans, who have travelled to the Middle East to fight for the Islamic State, some of whom have died in action. The threat that some might return to Canada as trained Islamic State agents is merely speculative.

Canada is engaged militarily against the Islamic State in Iraq, a mission just extended and expanded into Syria in March. Even for those who favour the Canadian contribution, the frame that the Harper government places around it should give pause. Repeatedly, the government has argued that there is a seamless web connecting Syria and Iraq with Canada. The first clause in the motion that Harper introduced extending the mission states that the Islamic State “has called on its members to target Canada and Canadians at home and abroad.” In his “great evil” speech, Harper asserted that “Canadians are targeted by these terrorists for no other reason than that we are Canadians.” This is as clever as Employment Minister Pierre Poilievre’s inane “the root cause of terrorism is terrorists.”

Of course there is a terrorist problem in Canada. A reasonable case can be made that the Anti-terrorism Act 2001 should be updated in light of the changing nature of the terrorist challenge over the past decade and a half. This case has emphatically not been made by the Harper government, which has failed to define clearly the nature of the threat; failed to indicate how existing laws and police powers are inadequate (or in some cases why powers added in 2001 have never been used); and failed to indicate how the vast and unaccountable expansion of policing powers in C-51 is proportionate to the actual threat.

Make no mistake: C-51 is breathtaking in the scope of its radical redrawing of the boundaries between state and society, between security and liberty. C-51 is the worst and most dangerous piece of national security law this country has ever seen. Among its most objectionable features:

Instead of defining the terrorist threat with greater precision, C-51 expands the definition of what might be considered terrorist activity or threats to the security of Canada to include “interference with the capability of the Government of Canada in relation to … the economic or financial stability of Canada” as well as “interference with critical infrastructure” or “undermining the security” of any other state – among a wide panoply of other potential threats. This is driftnet fishing.

Drawing on this expansive foundation, C-51 envisages better information sharing between government agencies and between governments – with no privacy safeguards in effect and no obvious controls over the extent of the personal information passed on, with whatever consequences for the individuals concerned. This has to be read in the context of the Edward Snowden revelations of epic Five Eyes spying, including the Canadian CSE collecting “metadata” on Canadians. In the face of panoptic surveillance operations, C-51 in effect trumps privacy protection laws.

C-51 scraps a cautious and limited “Passenger Protect” program in favour of a Canadian no-fly list that replicates the discredited U.S. no-fly list – the one that prevents two year-old toddler “terrorists” from boarding aircraft with their moms – and replaces a reasonable appeal process with a convoluted Kafkaesque “appeal” process in which banned individuals are told nothing about the case against them, while the judge considers even hearsay evidence in secret.

Any person who “advocates or promotes the commission of terrorism offences in general” will under C-51 be committing a criminal offence. Starting from a justifiable concern about abusive jihadi websites, ignoring existing laws against hate speech and incitement to violence, C-51 leaps into a direct assault on freedom of expression.

C-51 offers the Canadian Security Intelligence Service a new mandate to take “measures”, “within or outside Canada”, to “reduce” any threats to security. CSIS was created as an intelligence collection agency, in reaction to the scandals in the 1970s when the old RCMP security service was ordered to “counter” violent Quebec separatists like the FLQ and launched the “dirty tricks” era of illegal burglaries and barn burnings. Now CSIS is expected to be a Bond-like swat squad battling terrorists around the globe with muscle. If CSIS thinks it necessary, it may seek a so-called disruption warrant from a federal judge. The application will be heard in secret and, if granted, will authorize CSIS to break Canadian law and violate Charter rights, short only of committing murder, torture, rape or obstruction of justice! This would turn judges from being arbiters of the constitutionality of government actions into enablers of state lawlessness. Moreover, it threatens to reignite pointless RCMP-CSIS turf wars and undermines the viability of criminal prosecutions by contaminating the evidentiary trails required to lead to court proceedings. Subverting the rule of law while making counterterrorism more difficult is quite the trick.

There are no provisions for expanded oversight or accountability to match the greatly expanded powers provided to the agencies. In fact, the Harper government has seriously degraded the already inadequate existing patchwork of accountability.

C-51 is a monstrosity. To their credit, the NDP and Green parties have responded appropriately: it should be killed. To their shame, the Liberals said they would vote for what they admitted is a terrible bill, but would improve it once a Liberal government is elected. In other words: buy the stinking pig today on the promise to apply deodorant later.

The Liberals’ bizarre stance is explicable only as proving Harper’s strategy of using terrorism to terrorize his opposition. This worked on the gutless Liberals, but it has not been working on more and more Canadians, who have reacted with anger the more they have seen of the devil in the C-51 details. Even some conservatives have begun shaking their heads at an allegedly conservative government (slayer of the gun registry and the long-form census) bringing in police state powers reckless of individual privacy and liberty.

Harper has done something none of his predecessors ever did. He has turned national security into a partisan issue with which he hopes to savage his opponents. The economy as a reelection issue has sunk in lockstep with the collapsing price of oil, so peddling fear will take its place. He has even added Islamophobia, with cheap jibes at Muslim women wearing niqabs and hijabs. Apparently his reelection is worth to him whatever cost the country will pay in loss of civility and decency.

Perhaps the election will settle the matter. The result might demonstrate that a ruthless leader can employ irrational fear to perpetuate his rule. Or the Canadian people may instead decide that the “great evil” is not so much terrorism as it is Mr. Harper himself.