The Post depicts how in 1971 the Washington Post obtained, and chose to publish, a series of articles based on the Pentagon Papers. A couple of years earlier I had lived in Washington, and my own experience links up with the story told in The Post. More than a film review, this is a personal recollection and reflection on that story. 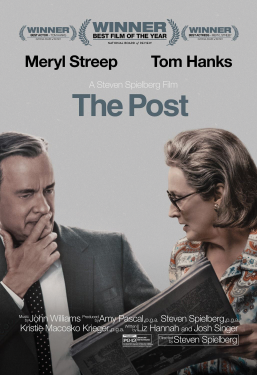 The Pentagon Papers were secret studies ordered by Defense Secretary Robert McNamara that exposed in great detail how the reality of American involvement in Vietnam was very different from the official story. Daniel Ellsberg, a strategic analyst at the RAND Corporation and the Department of Defense, had worked on the preparation of the studies in 1967. Once it all came together, it became clear to him that the war in Vietnam was unwinnable, and he decided that the American public needed to know the truth. A first exposé was published in articles by Neil Sheehan in the New York Times, but the Nixon administration managed to get a court order to force the Times to suspend publication.

The Post begins with the cloak-and-dagger efforts of Ellsberg and his collaborators to get the story out, primarily to the Post. It then goes, in gripping detail, into what happened at the newspaper when the Pentagon Papers landed on its doorstep. The focus is on the efforts of managing editor Ben Bradlee, played by Tom Hanks, to overcome technical and human obstacles to getting the story out.

At the heart of the movie is the dilemma the Pentagon Papers {posed for Post publisher Kay Graham, played by Meryl Streep. Graham had not long before stepped into the shoes of her dead husband Phil and faced intense pressure from her board, itself under pressure from the Nixon administration, not to publish the Papers. The film, and especially Streep’s strong performance, highlight the reality of a woman with little experience having to face men used to exercising power and treating women as less than equal. Moreover, her decision to go ahead was especially courageous since there was fear not only of political repercussions but also, as we learn in the film, that the public share offering then in process, and with it the company’s survival, would potentially be put at risk by publication of the Papers.

The Post is not a masterpiece: Sarah Paulson, as Bradlee’s wife, Tony, seems out of place in the film. Still, in typical Spielberg fashion, this historical drama is not boring even for a moment. In this, it stands in contrast with other 2017 Oscar-nominated films like The Florida Project and Three Billboards Outside Ebbing Missouri in which very little happens. Hanks is convincing, but the role is not as demanding as that of lawyer-negotiator James Donovan which he played in Bridge of Spies, perhaps Spielberg’s best historical drama. Since the writers do not go out of their way to help the viewer place the events in context, the fact that I was around when the events actually took place certainly makes it easier to follow this rather fast-moving story. I imagine that this makes me more appreciative of the film and its underlying message than might be the case with younger viewers.

At the end of the film, we are shown the scene on June 30, 1971, when the U.S. Supreme Court ruled 6 to 3 that the government had failed to prove harm to national security, and that therefore publication of the Pentagon Papers was protected under the First Amendment’s guarantee of freedom of the press. Then, in a sort of postscript, there is a brief scene depicting the Watergate break-in that took place a year later in Washington. Missing, however, is what happened afterward to Daniel Ellsberg: he too ultimately managed to avoid the prison sentence that he and everyone else as depicted in the film assumes awaited him when a court in 1973 dismissed all charges because of governmental misconduct and illegal evidence-gathering.

Two specific connections link the events recounted on the screen to my own experience. In 1968 and 1969, as Ellsberg was coming to sympathize with the antiwar movement, I was in Washington, the place the movement called the “belly of the beast.” I had applied to, and been accepted by, the Institute for Policy Studies, a progressive think tank that had just adopted a policy of inviting younger movement activists to bring a practical dimension to the too-cerebral efforts of the institute’s fellows. We junior fellows, I was told, could manage on our $50-a-week stipend only by sharing expenses in a commune. So in September 1968 I moved into the commune situated in a rather plush former embassy on 22nd Street, near the vice president’s residence. One could hardly live much closer to the centre of the belly.

In part because of our IPS connection, we were regarded as a leading voice in the local branch of the movement, which we a bit pompously named the Washington Free Community. While I felt fully accepted by my communal colleagues and several remained friends for many years, I never forgot that my being Canadian made me different, since I could not be drafted and sent to Vietnam. One of my confrères worked cleaning hospitals as alternative service; another made it back alive after serving in Vietnam; a sometime resident had been jailed as a draft dodger.

We read the Washington Post every day. It was then, as noted in the movie, effectively a local paper, nowhere in the league of the New York Times. Late that fall a young Post journalist, Carl Bernstein, came to interview us at the 22nd Street commune. His editor – I assume it was Ben Bradlee – found his treatment interesting enough for a long, sympathetic article. Bernstein was at the time too low-level to make it into the group of journalists at the Post whom we meet in the film as they pull together the sprawling pieces of the Pentagon Papers to produce an epic series of front-page stories. But his status changed soon afterward, when he and colleague Bob Woodward became the heroes of Watergate – and of the classic 1976 film All the President’s Men, in which Robert Redford played Woodward and Dustin Hoffman played Bernstein.

The IPS was another link to The Post, or at least to the publishing of the Pentagon Papers. The IPS had been founded in 1963 by Mark Raskin and Dick Barnet, intellectuals from the Kennedy administration, as a think tank where the best and the brightest could speak truth to power. In 1968 A Call to Resist Illegitimate Authority, written by Raskin and IPS Fellow Arthur Waskow, helped launch the draft resistance movement. Among the resident fellows I got to meet was Gar Alperovitz,1 who recently came to public attention in a feature story by Eric Lichtblau in the New Yorker entitled The Untold Story of the Pentagon Papers Co-Conspirators. It tells of:

“about a dozen clandestine encounters with journalists that Alperovitz orchestrated over the course of a three-week period, when he and a small group of fellow antiwar activists helped Daniel Ellsberg … elude an F.B.I. manhunt and distribute the Pentagon Papers … (Their) identities have stayed secret for forty-six years, despite the intense interest of the Nixon Administration, thousands of articles, books, documentaries, plays, and now a major film.”2

So I am admittedly biased when I suggest that you see the film if you haven’t done so already. Even if recent American political history is not your cup of tea, The Post will help you better appreciate the efforts today of journalists, nowhere more than at the Washington Post, to expose the lies of the current administration. Perhaps the film’s Oscar nomination was in part a reflection of the academy’s admiration of the Post’s efforts to expose the lies of the U.S. administration in 2017 as much as in 1971.