No one expected the Liberals to repeat their 2015 sweep of all 32 seats in Atlantic Canada, with nearly 59 per cent of the vote. In 2019, the Liberals’ goal was to hold onto what they could. In the raw currency of the Westminster system, i.e. the seat count, the Liberals did well, holding 26 Atlantic seats. The Conservative Party and the NDP reclaimed territory lost in 2015 while the Greens conquered new lands, winning their first seat east of British Colombia. All three achieved their goals, at least partially, with the Tories winning four seats and the NDP and Greens each winning one.1

Atlantic Canada has never been a useful descriptor; it’s as accurate as talking about “Africa.” The seat-by-seat and province-by-province details offer insight into the political fabric of a region even more hyperlocal and fractured than it was in 2015. Topline results suggest Liberal resilience; however, there are reasons for all four main parties both to feel optimism and to take pause.

The Liberal popular vote took a hit in all four Atlantic provinces, but they still came out on top in every one, with an impressive seat haul considering their vote share (see tables). In 2015, the Liberals claimed strong support across the region, winning more than 40 per cent in every riding. This time they were not able to maintain this regionwide floor. Anglophone New Brunswick delivered the biggest blow: the three seats won there by the Conservatives were in rural/suburban ridings in the anglophone south where the Liberals lost by at least 20 per cent. In Fredericton, the Liberals lost to the Greens in a three-way battle, with the Liberal incumbent losing 20 per cent of his 2015 share and placing third behind the Conservative candidate. Where the Liberals did hold on they did so by distressingly thin margins. In 2015, they won only one seat by a margin of less than 5 per cent; in 2019 there were six such seats, including two normally bedrock Liberal seats in Cape Breton, where two sitting Progressive Conservative provincial legislators ran for the federal Conservative Party. 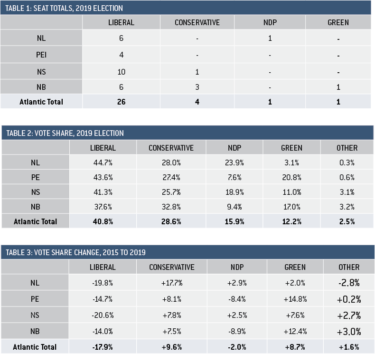 A Conservative Toehold, Not a Foothold

The Conservative Party, created in 2003, has struggled in Atlantic Canada, averaging 30 per cent across the region in the five elections between 2004 and 2015. Wiped out in 2015, the Tories saw a mild revival in 2019. In addition to the three seats in anglophone New Brunswick, the Conservatives’ popular vote grew impressively in Newfoundland and Labrador, from 10 to 28 per cent, though they failed to secure any seats.

Nova Scotia was a mixed bag, with the lowest Conservative vote in the four Atlantic provinces and failure to win back long-held seats that were lost in 2015. These included South Shore–St. Margaret’s, Cumberland-Colchester and Central Nova, where a “star” Tory candidate, country music star George Canyon, was beaten by 17 points. Because these seats went Liberal in 1993 and returned to what was then the Progressive Conservative fold in 1997, it was assumed that history would repeat itself in 2019. No Nova Scotia riding can be said to have solid Conservative DNA; the only winner was provincial MLA Chris d’Entremont, who won West Nova. Add this to the strong performance of the PC MLAs who ran in Cape Breton and it seems the Red Tory tinge of the provincial PCs (who ran to the left of the governing Liberals in the 2017 provincial election) persuaded voters to opt for the Conservatives. The relative successs of more progressive Conservatives should be noted by the Conservative brain trust as they prepare for the next election.

The NDP-Green Battle for the Left Intensifies

The national campaign began with a pitched battle between the NDP and the Greens for the title of Canada’s dominant left-wing party. The parties were roughly tied in the polls and mired in a vicious war of words; this was evident in New Brunswick in the weeks before the election was called, with the bizarre public defection of a mother-son team of New Democrats to the Greens.2 By election night, the NDP had won the fight, at least outside of Quebec, though the outcome was murkier in Atlantic Canada. The Greens are now the preferred choice of left-wing voters in parts of the region, especially in PEI, where Green candidates came ahead of those from the NDP in all four seats, and in New Brunswick, where eight of ten ridings preferred the Green candidate to the New Democrat. The Greens attracted new voters and better candidates and ran a stronger ground game across the region, as compared to the NDP which struggled. Even in the short term, New Democrats should be worried.

The NDP remains stronger than the Greens in Newfoundland and Labrador, where Jack Harris reclaimed the St. John’s East seat he lost in 2015. In Nova Scotia the NDP fended off the Greens, though neither party won a seat. The NDP’s vote share was roughly halved in PEI and New Brunswick as compared to 2015, while the Greens more than tripled their support. Those two provinces provided the Greens with their best provincewide vote shares.

The regional strength of the federal NDP vis-à-vis the Greens mirrors the situation of those parties at the provincial level. The federal NDP beat the Greens in Newfoundland and Labrador and Nova Scotia, provinces where the NDP holds provincial seats and the Greens are still a fringe entity (Nova Scotia) or nonexistent (Newfoundland). In New Brunswick and PEI the Greens hold seats, forming the official opposition in PEI, while the NDP in both provinces could be generously described as moribund. The lessons for the federal NDP and Greens are clear: your provincial counterparts are key to your federal prospects. The Greens built up their provincial organizations in New Brunswick and PEI and are reaping federal rewards. The provincial NDP in the same provinces self-destructed and that suffering now extends to the federal level.

A Region Made Varied

It is increasingly difficult to talk about a uniform Atlantic Canadian political character. This has long been the case; consider the 2008 federal election that saw the Tories closed out in Newfoundland and Labrador but winning a majority of seats in New Brunswick. The Liberal sweep of 2015 camouflaged this larger trend. The Greens are now clearly the third party in PEI and New Brunswick, while the NDP holds that title, tenuously, elsewhere. The Conservatives were pushed to the margins in the region’s urban centres and in francophone regions, which were dominated by the Liberals. The People’s Party was a discredited footnote here, as elsewhere, leaving a political map that shows a series of fluid front lines. For a region often seen as backward, the 2019 election showed Atlantic Canada to be more surprising, and diverse, than many commentators would have predicted.