In 1951, the Massey Commission warned of “the deluge of the less worthy American publications” which “threaten our national values, corrupt our literary taste … and endanger the livelihood of our writers.”1 But it was only in the next decade that this concern found its way into the wider public arena. The onset of mass television brought a whole new dimension to this concern and gave rise to a movement in support of public policies to defend Canada’s cultural industries.

It may very well be that we will look back upon the current decade, with the onset of streaming services like Netflix, as having effectively put an end to that discussion. Best we be prepared.

The highlight of the 517-page Massey Report2 was the recommendation to create a “Council for the encouragement of the Arts, Letters, Humanities and Social Sciences.” Six years after the release of the report, the Canada Council for the Arts was established. The founding of the Canada Council marked a departure from the Canadian government’s previous reluctance to spend taxpayers’ money to support culture: the Council awarded grants to writers and artists as well as institutions such as the Stratford Festival, Théâtre du Nouveau Monde and the Royal Winnipeg and National ballets. Canadian literature, relatively unknown internationally before the war, flourished in the writings of Robertson Davies, Margaret Laurence and W.O. Mitchell, among others.

The arrival of television brought significant direct government involvement. American television signals already reached an estimated 100,000 Canadians before CBC television began broadcasting in September 1952. The Broadcasting Act of 1968 created the CRTC, which established “Cancon” – Canadian content – regulations meant to ensure that broadcasting was “basically Canadian in content and character.” In addition to subsidies for Canadian content, non-Canadian (i.e. American) content was to be restricted. The government was reacting to concerns raised by leading intellectuals, starting with George Grant who warned of the Americanization of Canadian culture in his 1965 book Lament for a Nation. In 1976, Bill C-58 ended the tax concessions enjoyed by Canadian editions of foreign-owned publications such as Time and Reader’s Digest, as well as Canadian corporations advertising on American television and radio stations.

In this period, the CRTC adopted regulations requiring that 60 per cent of programs overall, and 50 per cent of prime-time programs, be Canadian-produced. Yet the effect of these restrictions on television content was limited since private broadcasters could fulfill this requirement in large part with news and public affairs shows, and thus show primarily American drama and comedy. Moreover, the explosion of cable soon brought U.S. programming into almost all Canadian homes.

To stimulate the production of original Canadian content to fulfill Cancon requirements, the Broadcasting Act created a mechanism, Canadian Content Development (CCD), whereby the Canadian broadcasting system would contribute to the creation and production of Canadian programming. Broadcasters with more than $1,250,000 in annual revenues were required to make a financial contribution of $1,000 plus 0.5 per cent of revenues above that amount. However, with the ongoing changes in the media landscape, these contributions have been falling. Conventional television stations’ revenue in 2017 declined by 4.1 per cent to $1.6 billion, the sixth consecutive year of revenue declines due to lower advertising revenue, according to the CRTC.

At the same time, Netflix was exploding. Between 2011 and 2015, the streaming giant expanded its Canadian revenue base by over 300 per cent.3 Netflix is the most important of the content providers that distribute streaming media directly to viewers over the internet, bypassing telecommunications, multichannel television and broadcast television platforms. These providers offer subscription-based access to television and film content acquired from other producers as well as original content produced specifically for the service.

We do not have up-to date or comprehensive data for Netflix since Netflix categorically refuses to provide it. In its public hearings, the CRTC unsuccessfully tried to require Netflix and Google, owner of YouTube, to provide data, such as the number of Netflix paid subscribers in Canada and YouTube’s advertising budget. In 2016, according to the Canada Media Fund, 96 per cent of Canadians under age 35 reported using YouTube in the previous year. We know that once a critical mass of users has opted for such a media service few ever cancel, leaving little room for this audience to migrate to other services.

Since these companies deliver – and even produce – programs for the Canadian public, they should fall under the definition of a broadcasting undertaking as set out in the Broadcasting Act of 1991. But they do not. In 1999, through its Exemption Order for New Media Broadcasting Undertakings, the CRTC excluded internet broadcasters from its Canadian content quotas, a position it reaffirmed in 2012. This position, it claimed, was based on its unwillingness to hinder innovation in the digital sector and its recognition of the evolution of new technologies.4 In reality, the CRTC had little choice, since only through Chinese-style censorship of Canada’s telecommunications system could Canadian consumption of internet-based content be controlled.

This means that, effectively, the age of open artistic borders is truly here, a byproduct of the widespread availability of broadband internet. “The genie is out of the bottle,” Rogers Communications argued in its submission to the CRTC study on the future of Canadian broadcasting. “There is no going back to the protected closed broadcasting system that existed prior to the widespread adoption of broadband internet.” In 2015, with more than 3.5 million paying subscribers, Netflix’s subscription base in Canada was around 30 per cent of all broadband-connected homes. Meanwhile, according to research from Ottawa-based consulting firm Boon Dog Professional Services, Canada’s seven publicly traded television providers lost 153,000 subscribers in 2015.5

Do Canadians outside of Quebec really care about the threat to their perceived cultural identity? According to a poll released in June 2016 by the Angus Reid Institute, 56 per cent think online media should be free from CRTC’s imposed Canadian content and ownership regulations. The same poll showed, not surprisingly, that young Canadians aged 18 to 34 are, at 63 per cent, most strongly opposed to such intervention. The principal reason why Netflix is growing while traditional television is dying is simply content. In Canada as elsewhere, innovative and high-quality programming, no matter where it is produced, attracts well-educated viewers.

No longer is American television the only benchmark for world-class shows – not even in the United States itself. Netflix, after producing the Spanish-language show Narcos, has been investing in international coproductions, offering its U.S. and Canadian subscribers an extensive foreign- as well as English-language library. A case in point is the supernatural mystery Dark, the streaming service’s first original German drama production. In a letter to shareholders, Netflix wrote that besides doing well in its home territory, Dark has been viewed by millions of subscribers in the United States.6

In sum, according to Netflix Chief Product Officer Greg Peters, “Netflix members around the world want authentic storytelling, they want a perspective from a passionate creator that’s grounded in the local culture.”7 Canadians, like viewers elsewhere, can now get the best-quality television and film from all over the world just as easily as they can get what is produced at home. The many shows Netflix has offered from almost every country in the world with a television industry include Case (Iceland), The Mechanism (Brazil), Babylon Berlin and Dogs of Berlin (Germany), Trotsky (Russia), Hibana (Japan), Rita (Denmark), Cable Girls and Money Heist (Spain), Bordertown (Finland), Suburra: Blood on Rome (Italy), La Mante (France), The Paper (Croatia) and Fauda (Israel). I could add many more, especially if I were to include other providers like Hulu and Amazon, with more coming onstream every week.

For artists and media producers in Canada, like their counterparts elsewhere, the future of the film and television industry lies in producing homegrown content that the rest of world wants to see. A critically acclaimed and internationally aired show like Orphan Black, which has a mostly Canadian cast and doesn’t hide its Toronto setting, will always find a market. Mediocre shows will struggle or fail. 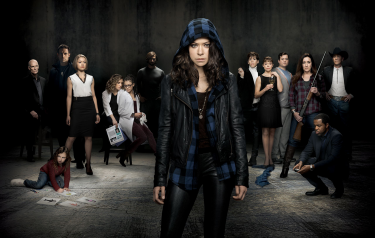 With the introduction of more streaming services into the already crowded marketplace, including the much-heralded new venture by Disney, competition for content is growing fierce. Because the rivalry for television productions has made the rights to much content so expensive, on-demand services like Netflix and Amazon, have begun producing their own, typically contracting local production houses and artists. This further reduces the amount of available content that can be licensed. And as the cost of licensing American content rises with rising demand, the decision to fund local productions becomes economically more viable for Canadian broadcasters. In this environment, Canadian producers have huge opportunities to find markets for their productions. As CRTC Chair Jean-Pierre Blais told the Canadian Club of Ottawa on March 12, 2015,

We live in an Age of Abundance. Content is everywhere on the internet and on television. And it is available to us at any time of the day or night, on any device we choose. Ironically, that is now our central challenge. The trick for all of us – creators, distributors, viewers, even regulators – is how to adapt to life in this new age. Because it won’t be easy.

In a much-noticed statement at the Prime Time conference in Ottawa in January, Catherine Tait, the newly installed President of CBC–Radio Canada, went “a little off script”:

I was thinking about the British Empire, and how if you were there and you were the Viceroy of India, you would feel that you were doing only good for the people of India. If you were in French Africa, you would think, “I’m educating them, I’m bringing their resources to the world and I am helping them.” Fast forward to what happens after imperialism and the damage that can do to local communities. So, all I would say is, let us be mindful of how it is we as Canadians respond to global companies coming into our country.8

The company she had most in mind was Netflix, whose director of public policy in Canada, Stéphane Cardin, responded that “Canada year over year ranks either number two or three in terms of production activity,” competing with the U.K. for second place behind the United States. Cardin noted that Netflix had produced film and TV content in eight of the country’s ten provinces, coproduced with just about every major broadcast group in English Canada and looked to greatly exceed its commitment of $500 million to be spent in Canada on local production over five years.9

The $500 million had been negotiated in a much-criticized deal with the now former Heritage Minister, Melanie Joly. However, whatever the numbers, we need to face reality and admit that the closed system of television distribution is long gone; the CRTC is effectively a cipher in the face of borderless international content providers. Canada can no longer produce mediocre television content and then try to protect it. Rather than try to inhibit Netflix and others like it, Canadian public policy should seek to help transform Canada into a world-leading media hub. On the global stage, Canada will have to compete against the rest of the world and create the climate to produce the kind of quality television that it has shown itself capable of turning out. Canadian artists will have to excel instead of merely survive and, with a nod to the CBC, in the Netflix age, “good enough” isn’t good enough any more.

2 Robert Sirman, Former CEO of the Canada Council, reported to an audience at the University of Toronto in March 2014 that over two years, the Massey commissioners hosted 114 public hearings in 16 cities in all 10 provinces. They received more than 1,200 witnesses and 462 briefs, met 224 times and logged over 10,000 miles. The Report contained 146 recommendations and was accompanied by over 55 volumes of supporting documentation.

3 Estimated Netflix Revenue in Canada from 2011 to 2015 (in Million Canadian Dollars),” Statista.