A lot of attention in recent months has been focused on Syriza, which won parliamentary elections in Greece in January 2015 with a strong anti-austerity program, setting off a new round of debate about an eventual Greek default on its international debts and/or withdrawal from the euro (Grexit). Of potentially greater significance, however, is the continuing ascension of Marine Le Pen, the charismatic leader of the National Front. Though presidential elections are not due in France until 2017, François Hollande, the current incumbent, is terribly unpopular, as is the likely candidate of the centre-right, former president Nicolas Sarkozy. Public opinion polls show the National Front to be the leading party in France, and in regional and local elections it has been cutting deeply into traditional bastions of support of both the right and left.

Marine Le Pen has made clear her disdain for the course the European Union has been following and the loss of sovereignty France has experienced ever since the Maastricht Treaty of 1992. She supports a French exit from the euro and increased state intervention to promote French jobs in an economy that has been buffeted by globalization. She has also made clear her opposition to what she sees as the Islamization of France and ongoing immigration from North Africa and beyond, a position rendered even more salient in the aftermath of the attacks by jihadi extremists on Charlie Hebdo and a Parisian kosher supermarket earlier this year. She has also expressed support for Vladimir Putin’s incursions into Crimea and Ukraine and for the Assad regime in Syria, breaking with the dominant Western position.

All this by way of introduction to Éric Zemmour’s Le suicide français, which has sold over 500,000 copies since publication in France and will be appearing in an English translation shortly. In it Zemmour, a well-known journalist and controversial public figure on the right, has chronicled more than 40 years of French political, cultural and social developments with the intensity of a surgeon honing in on a tumour in a stricken patient. Only the patient in this case is France, and the disease, according to its author, beyond remedy.

France has a long tradition of books chronicling the nation’s decline – Alain Peyrefitte’s Le mal français, published in 1976, comes to mind, as does Julien Benda’s La trahison des clercs of 1927. There is an even earlier history of authors on the right like Charles Maurras and the Action française around the turn of the 20th century or, a century before, Louis-Gabriel de Bonald and Joseph de Maistre, monarchist opponents of the French Revolution, denouncing the decline of France’s traditional values. Their perceived sources of decline are “outsiders” – Jews at the time of the Dreyfus Affair, intellectuals of the Enlightenment (la faute à Voltaire et Rousseau) in the aftermath of 1789. The tone is strident and unforgiving. 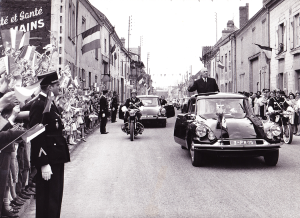 The same can be said of Zemmour’s book. He, however, has a more contemporary target. The student revolt of May 1968 opened the floodgates of social and political innovation, undoing the tightly knit fibre of French society that had allegedly existed until then. Like the Commandatore in Mozart’s Don Giovanni, the ghost of Charles de Gaulle haunts Zemmour’s book, casting a disdainful look at his incompetent successors. For Zemmour, like many right-wing intellectuals, is a temporal irredentist, and the golden age for him lies in the heyday of Gaullist France.

What are some of his main beefs against post-1968 France? May ’68 unleashed societal impulses that could no longer be controlled. Feminism, largely imported from the United States, began to sap the foundations of the traditional family. Close behind came gays with their demands for equality of treatment, up to and including same-sex marriage. The discourse of human rights began to creep into French legislation and judicial proceedings, reinforced by the rulings of the European Court of Justice. France was becoming more individualistic, less republican, closer to the Anglo-Saxon Protestant model than to its earlier Catholic or Jacobin traditions.

Zemmour has it a bit too easy. In 1967, a year before May ’68, the Gaullist government legalized birth control pills. Was it simply aping the United States or was it reacting to the new reality the invention of the pill entailed? Did it take May ’68 for the hold of the Catholic Church to weaken or had the process begun well before then, given the wave of secularization sweeping through western Europe in the decades following World War II? As for human rights, the UN Universal Declaration of Human Rights dates from 1948 and many Western countries promulgated human rights legislation in the decades that followed. There was nothing uniquely French (or American) about this development, as Canadians certainly know. The same is true where gay rights are concerned.

One of the more controversial features of Zemmour’s book involves his recasting of the role of the Vichy government in the deportation of French Jews during World War II. For many decades, this sordid piece of French history got little play – much as the revocation of the Edict of Nantes in 1685, which ended toleration of the Huguenots, had little play in earlier French historiography. It took the publication in 1972 of a major study by an American historian, Robert Paxton, to cast a critical look at the complicity of the Vichy regime with the Nazi occupiers. Zemmour, himself of Jewish origin, goes out of his way to downplay Vichy’s responsibility, if not entirely exculpate the regime. He emphasizes the fact that it was mostly foreign-born, rather than French-born, Jews who were shipped off to the concentration camps by Vichy, and that its anti-Semitic policies were mild compared to those of Nazi Germany. And he spends many pages excoriating the attention that recent French presidents from Jacques Chirac to Sarkozy to Hollande have paid to Vichy’s policies, acknowledging France’s guilt in the process.

Here again he overplays his hand. Without the intervention of outside historians like Paxton, the reevaluation of Vichy’s role might never have taken place. To be sure Vichy France was not Nazi Germany, but it was a compliant ally, and many Jews, both foreign- and French-born, paid for it with their lives. This was not a little “detail” of France’s World War II history – as Jean-Marie Le Pen, Marine’s far more pugnacious and anti-Semitic father, would have put it – but an important one. Not the whole of what the Occupation, the Resistance and the eventual outcome of World War II were ultimately about. But all the more relevant given the tendency to ignore it in the immediate aftermath of the war.

Some of the other major developments that Zemmour castigates also have little to do with May ’68. One of these is globalization, the decline of French manufacturing and a new international division of labour with China a rising power. It is well and good to hold up the decade of the 1960s, with its dirigisme and protectionism, as a model. But how well would France have fared with such policies, even with de Gaulle at the helm, 50 years later?

What is interesting in Zemmour’s take on France’s economic evolution is that he is no neoliberal. His views are those of a more traditional European (in contrast to North American) conservative, sceptical of the blandishments of liberal capitalism. At times, his views are closer to those on the left in their critique of global capitalism; he is not unlike Marine Le Pen in this regard.

He is also close to Le Pen when it comes to Islam and the threat it poses for France. Too many of the new immigrants (many of whom, incidentally, predate May ’68) have not been prepared to integrate into the mainstream of French society as earlier waves of immigrants had done. With the concentration of Muslims in many of the banlieues surrounding French cities has come a wave of Islamization and the reduction of traditional republican authority figures such as magistrates, police and teachers to a vestigial role. Hence the pressure on Muslim women to wear the hijab, the demand for halal meals in French school cafeterias, insistence on segregation between men and women in athletic facilities, etc.

The debate has grown more intense in the aftermath of the jihadi attacks in Paris in January. But the muscular response of the French government, singling out Islamic radicalism as a direct threat to the Republic, and the huge subsequent demonstrations in Paris and elsewhere by defenders of republican values suggest that France is not quite ready to roll over and play dead when faced with jihadi extremism. Le suicide français – not quite!

One further aspect of Zemmour’s book that bears attention is his strongly anti-European stance and claim that Germany has emerged as the true master of continental Europe while the French foolishly have played along. Zemmour’s anti-German sentiment recalls the anti-Boche cries of an earlier era – a jarring and unpleasant note. The truth of the matter is that France played an equal, if not dominant, role in the French-German couple through the first decades of the European Economic Community, and that its weakness in recent decades owes far more to its weakened economic position relative to Germany than to anything else. Has Zemmour anything to propose to turn things around? Not really, other than pulling up the drawbridge and playing Asterix against the Romans.

On a positive note, Zemmour writes well and has a mordant sense of humour that can hit home. As an example, this passage on Oscar Wilde: “Poor Oscar Wilde. Condemned in Victorian England for his homosexuality, he is celebrated 100 years later for exactly the same reason, though he would be ostracized in our society for what would be called his misogyny.” Zemmour is an equal opportunity offender, putting the entire French political class, left and right, through his grinder. Some of his observations, on the downside of globalization, for example, or on the problems of Muslim integration in the banlieues, ring true.

On the other hand, he overwrites, to a point where the reader begins to pine for the brilliant French aphorists of yesteryear who could capture in one sentence what takes Zemmour page after page. He can be terribly unfair, as when he castigates Simone Veil, one of the more honourable French politicians of the last half century and a concentration camp survivor herself, for her “imaginary“ tears when invoking the Holocaust. And his commitment to French patriotism and great figures of the past like Napoleon or de Gaulle has a retro feeling to it two decades into the 21st century.

Though Zemmour is not a card-carrying member of the National Front, in more ways than one his views parallel Marine Le Pen’s and those of the millions of French, urban or rural, traditionalist or simply disenchanted, who are rallying to her camp. One can see Zemmour, in the Gramscian sense, as an organic intellectual for the National Front. And that makes his book important.

My own affinities – no surprise – are closer to intellectuals of the left like Pierre Bourdieu, Pierre Rosanvallon or Thomas Piketty. But I cannot deny that the populist right in France has found in Éric Zemmour a robust champion of its cause.